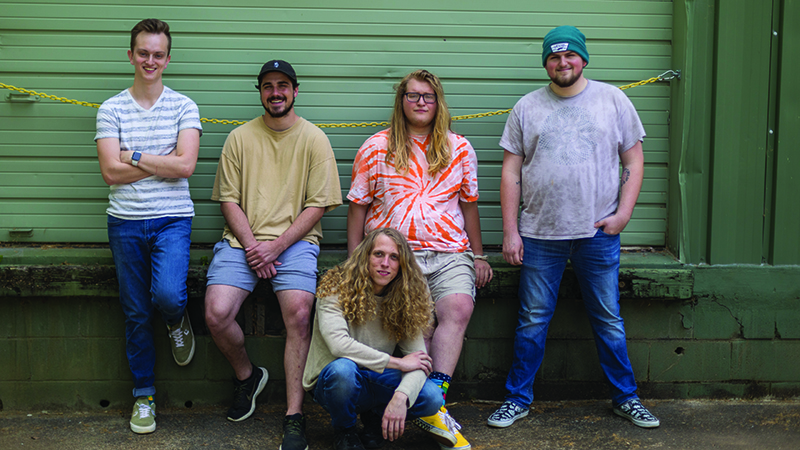 ‘We’re getting the band back together,’ were the words that echoed PureLife studios this past weekend.

LaGrange High School graduates Jory Marshall, Ryan Boyd, Michael Bailey, Liam McDonald and Evan Newsome reunited for a one-night album release party Saturday after not seeing each other for months. For some of the other band members, it had been years since they’d seen one another.

Marshall started the band The Cult Classic while in high school almost six years ago and has been writing songs for the album since 2012.

“We had been friends for forever and all had musical talents,” said Marshall, who is the lead. “We all have been out at college and haven’t been able to all get together in a while. So, this performance is a big deal for us. We are celebrating our 12-song album called, ‘It Keeps Getting Better,’ which has started dropping singles on Spotify, Apple Music, and wherever you listen to your music.”

The band said it was excited to see everything come full circle.

“We’ve just been working on this for so long,” Marshall said.

“We got the whole band back together and are performing songs that I wrote back in 2012.”

The album was recorded while all of them were on Christmas break and home from college in 2019.

After many tweaks to sound and a dozen meetings later, the band was finally able to release the album in April.

Saturday was the first time in more than a year the whole band was together and playing.

“Our muscle memory kicked in, and it sounded great,” McDonald said. “None of us have ever quit music, and we all still play regularly. It felt like riding a bike again when we all got together to play.”

Boyd said even though they are all talented musicians separately, when they come together they are even better.

“We have really good chemistry going on,” Boyd said. “It was easy to fall back into it. These are all songs that shaped us while we were in high school. They are a part of us, so it easy to play them together again.”

McDonald said he was thankful for his mom, Maggie McDonald, who owns PureLife Studios and helped nurture their musical talents.

“She gave us a space to be productive with our music,” McDonald said. “Our musical ability just got so much better because we were able to learn and grow here.”

Bailey said added that he was excited they were able to come back and perform on the same stage that helped them become who they are today.

“If it wasn’t for Maggie, then we wouldn’t be the same musicians today,” Bailey said.

“The fact that she let us come back and perform to is a really big deal to me.”