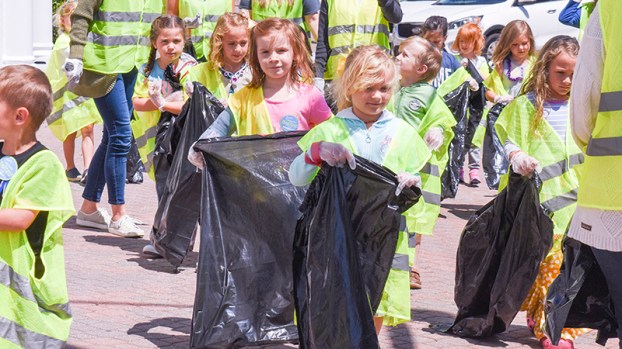 Keeping LaGrange litter-free is usually a task for the area’s adults, but on Monday, a group of youth took on the responsibility of cleaning around their school and church.

Children with the First Presbyterian Montessori extension day program, a kindergarten program for the church’s five and six-year-olds, spent the afternoon learning the importance of keeping their city litter-free, as well as their role in making the world a better place by doing so.

After donning adult-sized vests and trash bags, the 15 children in the program, and its teachers picked up litter in LaGrange’s downtown area, with each piece of trash seeming like a found treasure by many of the children.

“They’re really excited [about the pickup],” said Katie Mercer Van Schoor, marketing and communications manager for the City of LaGrange.

Van Schoor educated the children on litter pick-up prior to their exhibition.

Monday’s pickup acts as a sort of preview for the city’s annual “Leaving LaGrange Better Than We Found It” litter pickup Friday where hundreds of city employees and volunteers participate in a massive city-wide litter pick-up. City offices are even closed down for half a day so everyone can pick up.

The city also holds monthly litter pickups that are family and community-focused that have grown exponentially from local participation.

Monday’s pickup was a first for the First Presbyterian Montessori extension day program and drew the attention of passersby as the children excitedly searched for trash along the street.

Lindsey Robinson, owner of The Local Chiropractor on Church Street, left her office to get a closer look at the pint-sized litter crew and was pleasantly surprised with their dedication.

“I think it’s great, it teaches them community service from a young age, and there’s definitely a need for it,” Robinson said.

Friday’s ‘Leaving LaGrange Better than We Found It’ litter pickup will be held from 8 a.m. to 1 p.m. and begin in front of LaGrange City Hall, located 200 Ridley Avenue. After the cleanup, city employees and volunteers are invited back to Sweetland Amphitheatre to have lunch before going back to work at 1 p.m.

City offices will open at 1 p.m. Interested citizens may also contact Van Schoor at kvanschoor@lagrangega.org or (706) 883-2055 to pick up supplies to pick up in their own area.