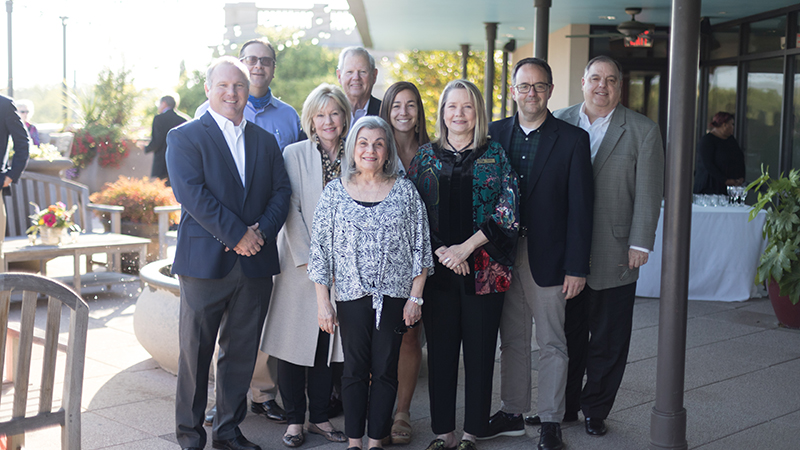 The Del’avant Event Center was once the home of the Kress and McLellan five-and-dime stores.

The building itself is more than 100 years old and was donated to the Downtown LaGrange Development Authority a little over 10 years ago. The Del’avant building was redeveloped in 2010 and donated to the DLDA as a gracious gift from the Callaway Foundation.

On Wednesday night, key community stakeholders, DLDA staff, Del’avant vendors and staff all gathered on the rooftop to celebrate the 10-year anniversary of the event venue.

Bobby Carmichael, who is the past DLDA executive director, noted the success the Del’avant has had in the past 10 years.

In addition to the event facility, the Del’avant building includes retail space for rent, as well as four loft condos. Carmichael thanked the Pam Shepherd and Dr. Nick Vlachos for being the first tenants in the lofts when they first opened.

“They kept an eye on things for us,” Carmichael said. “They would call when things didn’t look just right. It was great experience.”

Carmichael added that the building and event center has been a great asset to downtown and tourism to the community.

Speer Burdette, past president of the Callaway Foundation, said he hopes to see the continued success of the Del’avant going forward for another decade.

“The DLDA and Callaway Foundation has helped this amazing building be successful and helped really realize the vision for it,” Burdette said. “It attracts people to downtown and the numbers of the weddings here are mostly from out of town. So, not only does it help our local people, but it brings people from out of town to see our wonderful city.”

Del’avant proceeds serve as a revenue source for ongoing revitalization of downtown LaGrange. Building upon a sense of community, the purpose of the DLDA is to develop and promote a healthy and prosperous downtown within the context of cultural and historic preservation.

“Can’t believe it’s been 10 years,” Burdette said. “Just to reminisce a little bit, when the Kress building came for the sale, the Callaway Foundation didn’t have a plan for it. But they knew that they had a plan for downtown, and then if something was going to be successful it would be this building.”

Burdette said that the idea came about for the event center when former DLDA Director Suzanne Foody said that it would make a great space for an event.

“She was leaving town and said it as she left,” Burdette said. “We kind of just stopped and thought, what that could look like. We moved forward with that idea and created a really great design, while keeping the historical significance.”

Burdette added that he was thankful to be part of the growth of Del’avant.

“It is wonderful to have 10 years of success, and I look forward to being a part of many more years to come,” Burdette said.