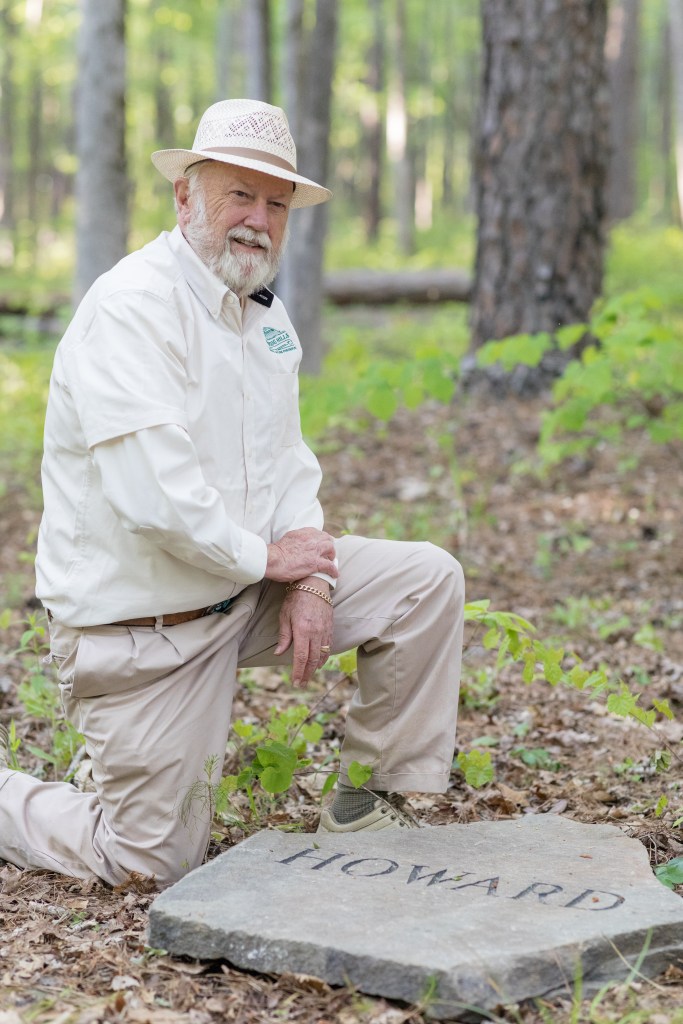 Ralph Howard, 78, kneels beside his own headstone, a large natural rock with his last name — the family name that stretches across the very land he stands on — etched in large, bold letters across its face.

Staring at one’s own headstone might be a weird feeling for some, but for Howard, it’s peaceful, as he looks around at Whispering Hills Memorial Natural Preserve, a “green” cemetery he recently started.

The preserve opened officially April 22, the 51st anniversary of Earth Day, which Howard noted was a suitable date considering the impact the nature of the preserve has on all who visit it.

“It’s suitable,” he told a group of visitors during the preserve’s ribbon cutting ceremony.

When Howard or anyone else who desires a burial plot on the property passes, they will be buried in a simple hole, wrapped in a shroud or in a biodegradable container, in the ground, devoid of concrete or an expensive coffin.

Howard originally wanted to be buried beside one of the streams on the property, the same stream he, his sister, and his friends and family members used to play near when they were children, just behind his family home. The area turned out to be too rocky and overall unsuitable to be harvested into burial ground, but the new location, hardly a stone’s throw from the stream, suits him just fine.

“I wish my parents were alive today, they’d prefer to be buried here … ” Howard said. “This is a good spot for a family plot. Anita, my wife, hasn’t declared where she wants to be buried, but one thing we know is that no one gets out of this life alive.”

His land spans 140-acres of green terraces, with clusters of plants, familiar and rare, and streams that bleed into West Point Lake. Along the paths, four Arabian horses roam fenced-in meadows, eagerly awaiting passerbys in hopes of earning a treat. Stone benches await tired bodies, or welcome those who simply want to take in the earthy scene around them.

The preserve is nestled upon the rolling hills of West Georgia, a mile south of the Chattahoochee River.

The United States purchased the land in a treaty with the Creek Nation in 1825, and settlement on the land began when Georgia began distributing the land in 1827.

Plowman’s laborers began tilling the cleared area in 1830, and contoured terraces were established around 1900.

At the entrance of the preserve sits a “Resting Plow” by sculptor Gordon Chandler, a monument to the labor of the land’s settlers.

In 1882, Troup County built a bridge at the location and the road became Mooty Bridge Road.

The land fell into the Howard family’s hands in 1946 when Ralph’s parents bought it, and was inherited to him and his sister, Jean, when they passed.

It’s truly a magnificent place, noted Jeannette Little, the Howards cousin, who would play and explore the property with Ralph and Jean during her childhood. She likes it so much that when lots become available for purchase, she’s going to buy one.

A traditional funeral, filled with graveyards, headstones and chemicals does not appeal to Little.

“I love nature, and I grew up out here,” she said. “I just think it’s perfect, an ashes to ashes dust to dust sort of thing.”

The first “funeral” on the new preservation was not a burial at all, but the scattering of the ashes of Kemp Freeman’s uncle, Alan Raby, as well as his mother and grandmother.

Raby was a good friend of Howards, and Howard welcomed him to be the first person interred on the property.

Freeman held onto the ashes for three years while Whispering Hills was going through its legal stages. He held onto his grandmother’s for 10.

“It’s a relief I waited for so long,” Freeman said.

Those interested in burial at Whispering Hills will need to first go on a tour of the property, taking the opportunity to explore and decide on a potential burial spot.

However, only 20 of the 140 acres is burial property, and only 10 of that is currently suitable for burial due to roots and rocks and unlevelness in the land, Howard said. Certain plants, four of which are highly rare, additionally make spots harder to reserve, as not even cremated remains can be laid to rest there.

Once a spot is chosen, clients can pay for a personal or family marker to put in the area. The markers have a built-in GPS so that clients can find them even years after they are put down.

Howard has plans to expand the burial property into the West Point Lake property, a plan that will depend on time and conversations with the Troup County Board of Commissioners.

“No need to push it at this time, you’ve got to wait until the conditions are right,” he said.

Howard and Little both have planned their forever tombs once they depart from the world, but the concept of death, of decomposing in the earth to the plants and flowers around them, does not shake their composure.

“When I die, my soul will go to Heaven, and I don’t really care what happens to my body,” Little said.

Before he learned about the concept of green burial, Howard hadn’t planned for his demise.

Now, the idea of his death in the natural world is a comfortable subject to discuss. He knows the place he wants to rest is on the land that holds some of his fondest memories. He accepts what’s to come.

“[Death] is inevitable,” Howard said. “I don’t want to live when the quality of life is gone. I’ve seen it happen … I don’t want any of that.”