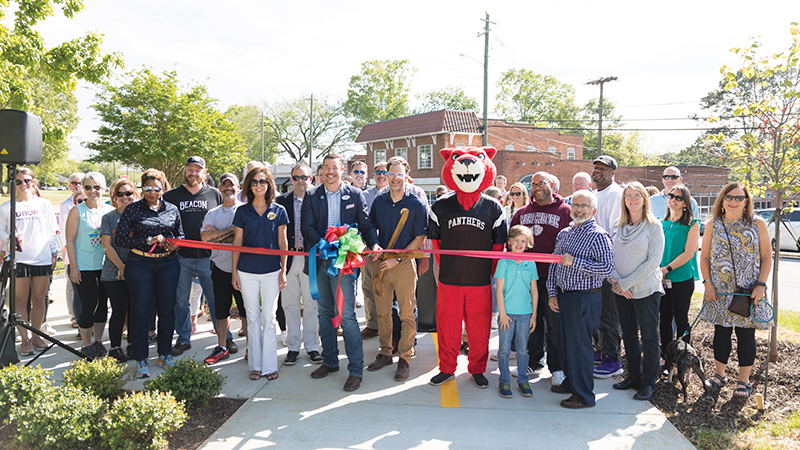 The Hillside neighborhood connection will run from the LaGrange College baseball field down to the Callaway Foundation building. Four segments — Granger Park, Eastside Park, LaGrange College and Country Club — have been completed since the project’s inception in 2016.

Friends of The Thread President Charlie Metcalf said a lot has happened since the last ribbon cutting.

“We really didn’t get a chance to celebrate three other segment completions,” Metcalf said. “I’m so thankful that we didn’t have to stop construction. I am so thankful for this trail that during a very hard year, we still had the ability to get outside, to breath some fresh air, see some other human beings in person, from a safe distance of course.”

Currently in the works is a segment that will run from Cherry Street down past Mulberry Street Cemetery, then hug the rail line and go down Dunson Street to Callaway Memorial Tower. It will continue South to Hunnicutt Street.

Another partially-completed segment of The Thread runs from Twin Cedars Youth and Family Services to Calumet Park, where it ends. Eventually, that segment is planned to continue west through the Calumet Park neighborhood, cross East Depot Street and the train tracks and link up with another segment near Southbend Park.

“If you haven’t had a chance to walk it yet, it is awesome,” Metcalf said.

He added that almost 10 miles of The Thread has been completed.

“This project is truly a product of our community,” Metcalf said. “Ordinary citizens who put forth good ideas and political leadership that listens work together and help implement it. I am so blessed to be able to serve alongside some talented individuals on the Friends of The Thread board.”

Part of the funding for this segment comes from a recreational trails program grant from the Georgia Department of Natural Resources.

Metcalf said he hopes to see more locals using The Thread as temperatures get warmer and summer approaches.

“I know a lot of you have heard the story of how the mayor and I went to a $5 million breakfast one morning,” Troup County Chairman Patrick Crews said. “Here we are many years later, seeing the returns of that breakfast. This has been a great asset to our community.”

Crews added that LaGrange was named one of the 10 most vibrant city centers that aren’t Atlanta in the Atlanta Magazine, and it specifically mentioned The Thread.

“This being part of our property here, we are certainly glad to be a partner to make this The Thread continue to move throughout our community,” Crews said.

FOTT recently announced details of its new transformative community initiative called “I Train on The Thread” and unveiled new road races planned entirely on The Thread for 2022. With the support of Emory at LaGrange, Friends of The Thread will host the Emory Thread Races on Saturday, Feb. 26, 2022, and will include three races.

The races include a one-mile fun run that is completely free, a 5K race and 10K race.

The 5K and 10K are both USATF certified and will serve as a AJC Peachtree Road Race qualifier.

“We are committed to beautifying and enhancing the city of LaGrange and Troup County for our enjoyment, for the enjoyment of future residents, for the enjoyment of visitors, and for our community,” Thornton said. “We are proud of LaGrange, and we are proud of Troup County. We look for opportunities to showcase that. The Thread has become one of the principal things that we like to showcase and we like to talk about.”

Thornton said even though it started as a conversation at Gus’s Grill one morning many years back, it has become much more than that.

“We recognize we are building 27 miles and are building that in phases,” Thornton said. “You can’t go out there and do it all at once. We’ve been strategic about trying to build phases around town and connecting amenities together. I think this segment is a great example of that.”

He added that this new portion ties into the revitalization of the Hillside community as well.

“I believe that bringing The Thread here is only going to enhance that revitalization of the brewery, the restaurants, the gift shops and all of the various amenities here in this historic commercial center,” Thornton said. “It’s not just about poured concrete. It’s about getting people out of their homes, getting them into communities, getting them into nature, enjoying the beautiful surroundings and enjoying each other’s time and friendship.”