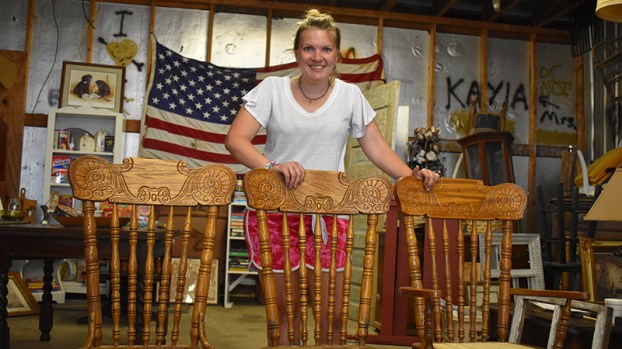 One house’s junk is one woman’s livelihood, as Mia Cosper came to find out when she opened her antique shop three years ago.

Since opening Sweet Tea’s Antique and Vintage in 2017, Cosper has been working with Grayhill Clearing and Grading to gut eight of LaGrange’s historic houses and save what she can, including reusable wood, doors, windows, fireplace mantels and even pieces of china if possible.

When the houses in question are scheduled for demolition, Cosper is called in to pick through the home’s remains and prevent as much from being sent to the landfill as possible.

She then takes her haul of odds and ends back to her shop where she uses them as pieces in other projects or, after refurbishment, cleaning or repainting, she sells them as-is.

During her recent salvage at a home on Vernon Road that was previously owned by the LaGrange College, Cosper salvaged an early 1900s mantle that, she noted, was hand-carved and brilliantly intact.

Another find, a Gothic-style iron gate from Alabama, is being separated and cleaned for a variety of uses.

“They have a piece of history with them and a lot of people like that,” Cosper said. “You’re saving history … there’s never going to be more [of these items] … once they’re gone they’re gone.”

Cosper began antique hunting over seven years ago while she was working for Belk’s.

She began refurbishing furniture from various thrift stores to furnish the home she was sharing with her young son and discovered she had a knack for it. She took note of vintage-like items sold at other stores and decided she could turn her skill into a way of life.

The hunger to own her own business grew from then, and she soon started testing her new-found passion with a booth at the Southern Charm vintage marketplace.

After losing her job at Belk’s, two weeks after she signed the lease on her Whitesville Road location, Cosper charged headfirst into building her own business. She had already taught herself necessities such as how to install drywall and refinish cabinets, how to use wood finish and nails. Other skills came with time and patience.

“I just fell in love with it,” Cosper said.

On occasion, her now six-year-old son pitches in and earns a pretty penny helping his mother.

“There’s been days I’ve cried, days when I’ve asked myself why am I doing this, then I remember he’s why I’m doing this,” she said. “When he’s 21, [the business] is his, but if he doesn’t want it, that’s fine. I want him to follow his heart. I did.”

Between each project, Cosper awaits a phone call for her next salvage and revels in the idea of preserving even just a small piece of LaGrange’s history.