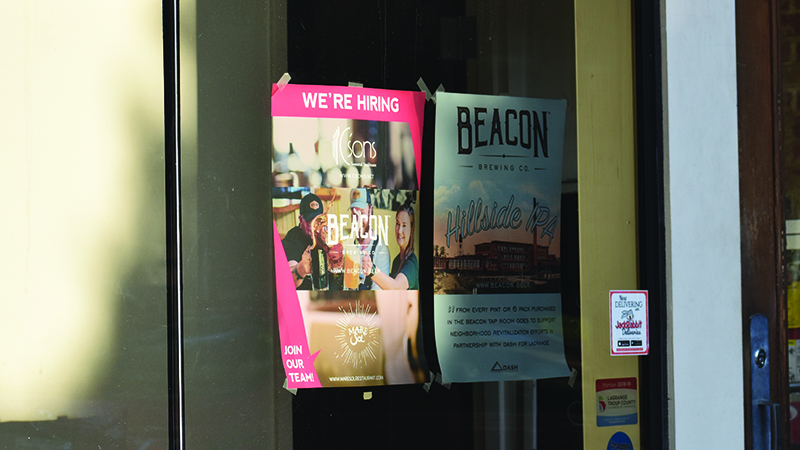 Chase Hudson, co-owner of Mare Sol, closed his restaurant Monday as a way to give his overworked staff a day off.

Mare Sol is one of the many restaurants in LaGrange, from chain to privately owned, experiencing staffing shortages right now.

Restaurants throughout LaGrange have “now hiring” signs posted on their property or social media, advertising the positions they need to fill. Right now, the surge of customers outweighs the number of employees available at many restaurants.

Hudson’s business currently has 50 employees, and he said he needs more employees who are willing to work more hours. He is hiring for all positions from wait staff to bartenders.

These issues have been ongoing for a year now, he said, and ultimately affect customer quality.

“Not being able to open every day is certainly an issue, and we’re not able to provide the level of service we always want to provide,” Hudson said.

Some chain restaurants like Zaxby’s have closed their dining rooms due to being short staffed, and others like Burger King have posted advertisements for positions needing to be filled.

The hiring issues stem from a variety of reasons, said Karen Bremer, the CEO of the Georgia Restaurant Association.

Women who left the restaurant business may have done so due to caregiving responsibilities, especially with children. With many daycares and schools still recovering, they may not have returned to their previous roles yet, Bremer said.

Individuals may have also left the industry to pursue different careers during the height of the virus.

“In the restaurant industry, you have a lot of people who have a lot of degrees and credentials but who choose to be a professional bartender or server,” Bremer said. “The mindset is that they have returned to those alternate fields.”

Another more pressing issue lies with individuals who are still acquiring unemployment benefits.

Bremer found, through conversations with restaurateurs, that many businesses are getting applications but applicants do not return for an interview.

“When you’re on unemployment, there’s a requirement that you file with the government,” Bremer said.

Bremer speculates that some individuals are fulfilling the requirements with the government to show that they are actively seeking employment but are not.

Bremer said there are approximately between 50,000 to 75,000 open jobs in the restaurant industry across the state.

The Georgia Department of Labor announced on April 22 that the number of jobs and employment numbers were up in every metropolitan statistical area from February to March of 2021.

In March, GDOL recorded that unemployment was at 4.5 percent which is the lowest it has been since April 2020. At that time, the unemployment rate was 12.5 percent.

“We had another strong month in March,” said Commissioner of Labor Mark Butler. “We saw the unemployment rate drop, along with an increase in jobs across the state, and most importantly, a decrease in over-the-year initial claims for every region.”

The GDOL has paid over $20.9 billion in state and federal benefits since the beginning of the pandemic in March.

In a recent interview with the LDN, Congressman Drew Ferguson attributed the hiring issues to unemployment benefits.

“People are making more money staying at home, rather than working,” Ferguson said. “What the Democrats did in this last COVID-19 bill is to do an enhanced unemployment that pays people more to stay at home than to go to work. It robs them of the dignity of work. It is crushing our small business community.”

Ferguson added that it is something he is seeing across the state and not just in the restaurant industry but also in manufacturing.

“It’s going to destroy our economy and our fellow Americans,” Ferguson said. “Business community needs it and America needs our fellow citizens in the workforce for their talents, their energy and their drive.”

To try to fill these open positions, she said many restaurants may offer bonuses for guaranteed employment.

Many employers may be waiting for unemployment benefits to dwindle and for summer to welcome in a new wave of job seekers, Bremer said.

As the shortages work themselves out, Bremer implores customers to have patience and empathy as they wait to be served.

“It’s very labor-intensive work,” she said. “The restaurants have been through so much. We would appreciate our guests having patience with us right now as we get staffed up.”