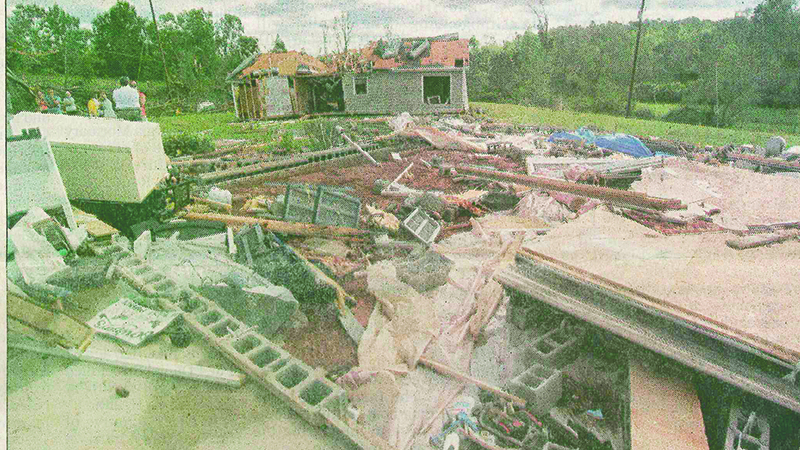 The Hornsbys house was destroyed in the 2011 tornado. --File Photo

Like many others, Susan Hornsby and her husband, Mike Hornsby, will never forget April 27, 2011. A date that has become synonymous in the South for bad weather was the day they lost all of their possessions, including their home, which was completely destroyed by a tornado that caused significant damage in Troup County.

Susan says she remembers her life flashing before her eyes.

“We could feel ourselves being lifted up, and everything was crashing and coming apart,” she said. “I thought ‘well, this is how my life will end.’ I said ‘I’m dying now.’ We both thought that. I was very surprised when I heard Mike’s voice. It kind of shook me back into reality.”

When the tornado finally passed, the only room left standing in their entire home was the bathroom that they were sitting in.

Susan had been in the bathtub for a while, as she’d seen the footage from Tuscaloosa and others parts of Alabama and had a bad feeling. Alabama had 62 tornadoes that day and hundreds of people died.

“I’d never sat in that bathroom. I’d been in the hall one or two times. For some reason, I really had a gut feeling,” Susan said. “I got a couple pillows, the police scanner and my radio and I went and got in the bathroom.”

She said she’ll never forget sitting in the bathtub and hearing the song “Knockin’ on Heaven’s Door” playing on the radio.

That decision might’ve been a life-saving one.

“The only room standing was the bathroom we were in,” she said. “The chair he had just gotten up from was blown across the pasture, all the way down the road.”

When the storm finally passed, both of them were in shock. Eventually, Susan heard Mike’s voice, and it surprised her.

When Mike went to get up, he had a board on his head. It’d almost flown into his head.

“One of the boards around the pool had shot through the tub and the shower and missed his head by like two inches,” Susan said.

Eventually, they were able to get out of the house, gather themselves and evaluate the damage. The roof was gone and the house was completely destroyed.

They were able to recover a couple of photographs, and they found a ring that Mike had given Susan on her 25th anniversary. She still has it to this day.

Susan said the help they received from the Red Cross and others was incredible. She mentioned a couple from Colorado, who had felt a calling to visit family in LaGrange on the day of the storms, spent several days helping to work through the wreckage.

Eventually, the Hornsbys rebuilt in the same spot, but downsized a few years ago. At that time, Susan was a teacher at Hollis Hand Elementary School and Mike was the pastor at New Hope Baptist Church, but both are retired now.

Susan said, unlike many who have been through that sort of experience, she’s not scared of the weather, but she did learn a few things from their close call.

“I know now to put on shoes, to always have shoes nearby and to put on a helmet,” she said. “When we saw the way that board came through that house and saw the way it would rip off your freezer doors and your refrigerator doors, you need a helmet.”

They also had a new perspective on life.

“It teaches you to live each day like it could be your last and we have,” she said. “We don’t take it for granted.”