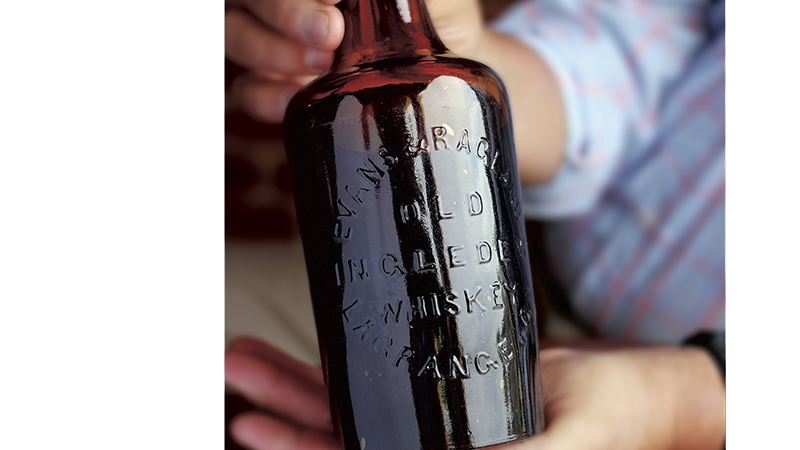 What’s known as the oldest bottle of whiskey is also the most well-traveled.

The antique bourbon bottle, estimated to be at least 250 years old, started its journey in LaGrange, judging by the engraving on its face, and has now been sent to Boston to be auctioned off later this summer.

The delicate bottle, which still has aged whiskey inside that is older than the bottle itself, was previously owned by Alexander “Rex” Woolbright, of Newberry, South Carolina.

Why let go of such a historic treasure? Woolbright wants to share the antique with the world, and give it a chance at putting Georgia in a unique light.

Woolbright’s ultimate hope is that the bottle will go on to one of Georgia’s museums and put LaGrange on the map.

“It makes us really happy to bring what we’ve learned on the bottle back to all the people in Georgia, especially LaGrange,” Woolbright said. “Now [Georgia] can say they have the oldest bourbon in the world and that it came from LaGrange… they can’t say Kentucky, they can’t say South Carolina.”

Woolbright said the bottle came into his family’s possession after former U.S. Secretary of State

Based on Woolbright’s understanding, there were three bottles of the whiskey given out as gifts by J.P. Morgan before his great uncle received it.

and learned that the other bottles were given to President Franklin Roosevelt and Vice President Harry Truman— also as Christmas presents.

After Drake’s death, Woolbright and his wife were cleaning in their home when they came

across the bottle and a note.

With all the publicity surrounding the bottle, Woolbright has communicated with many experts trying to find out more about it, including the distillery where the bottle may have come from.

As far as is known, there were no bourbon distilleries in Georgia after the Civil War.

Woolbright’s story was published in the June/July issue of LaGrange Living Magazine, earning the readership of one a woman who did her own research on the bottle.

That person later emailed Woolbright with information she found through the University of Georgia Library. She was attempting to locate the distillery where the bottle was made and found information about how two men sued the Atlanta West Railroad Company after 30 bushels of corn were ruined during a trip to LaGrange around the same time the bourbon was bottled, creating a possible link with the whiskey’s source.

“We now know that they had corn there and they were making their own whiskey or they brought it by the barrels,” Woolbright said. “They were corking their own bourbon there in these bottles.”

Upon receiving the bottle from Woolbright, Skinner’s Rare Spirits expert, Joseph Hyman, performed testing on the bottle with collaboration with the University of Georgia to test the authenticity of the liquor within the bottle.Carbon-14 dating conducted on the bottle indicates, with the highest probability, that the whiskey was produced between 1762-1802, Skinner said in the official press release about the auction.

“We assess that the whiskey was produced circa the late 1700s,” Hyman said. “Standard practice was to store spirits in large glass demijohns after being aged in oak barrels.”

The raw data was then evaluated by the University of Glasgow and determined to be vourbon with an 81.1% probability of being produced between 1763-1803, which places it in the historical context of The Revolutionary War of the 1770s and the Whiskey Rebellion of the 1790s.

Lewis Powell IV, an archival assistant with the Troup County Historical Society Archives and Legacy Museum who has been communicating with Skinner, concluded that the whiskey itself was bottled by Evans & Ragland, a wholesale grocery store, post-Cvil War, but the whiskey itself is the ultimate find.

The whiskey was most likely imported in large demijohns or barrels and bottled on site.

The exact origins of the whiskey is not known, Powell said, but the likelihood that the whiskey was distilled in LaGrange is “an impossibility,” Powell noted.

“If it was distilled in the later 18th century, there was nothing here at that time,” Powell said. “This was Indian territory, and to our knowledge Indians did not distill whiskey.”

The bottle will be auctioned off in the June 22-30 Skinner Auctioneers Rare Spirits online auction.