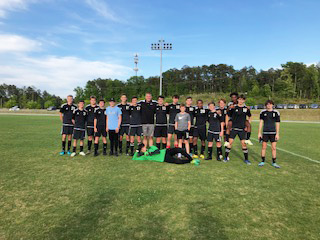 It had the makings of an easy night for the Lafayette Christian School Cougars.

The Cougars came out firing in Friday’s state-playoff soccer showdown against Grace Christian Academy, and they had a 2-0 lead in the first half.

As it turns out, there was nothing easy about it for the Cougars, but when the dust cleared and the game was over, they had the win and the accompanying berth in the semifinals of the GAPPS state tournament.

It was tied 2-2 at the close of regulation, and after neither team scored in overtime, it came down to penalty kicks.

“It was kind of hot Friday, and humid, and the guys were just exhausted, both teams were,” said Lafayette Christian coach Chris Bryant. “It was a battle. It was the way a playoff game should be.”

Lafayette Christian will be at home on Tuesday at 6 p.m. against Cumberland Academy, with the winner advancing to Friday’s state-championship game against Harvester or Georgia Christian.

Taylor scored the first goal on a direct kick from about 20 yards out, and Bryant converted a penalty-kick attempt to give the home team a 2-0 cushion.

Grace Christian scored a goal late in the opening half to get within one, but Lafayette Christian nonetheless dominated the first half of play.

“We were in control of the game the entire first half, even though they scored one right at the end of the first half,” Bryant said. “We came out and put it in cruise control thinking we had it in the bag, thinking we’d won, but the other team kept fighting and fighting. It made it exciting.”

After two scoreless overtime periods, it was on to penalty kicks.

Parnell was the star of that portion of the game.

Parnell not only had two critical saves, but he also made one of Lafayette Christian’s penalty kicks.

Also scoring on penalty kicks for Lafayette Christian were Taylor, Ben Dixon and Bryant, with Bryant’s goal clinching the victory.