Greenes reflects on decades of memories in family home 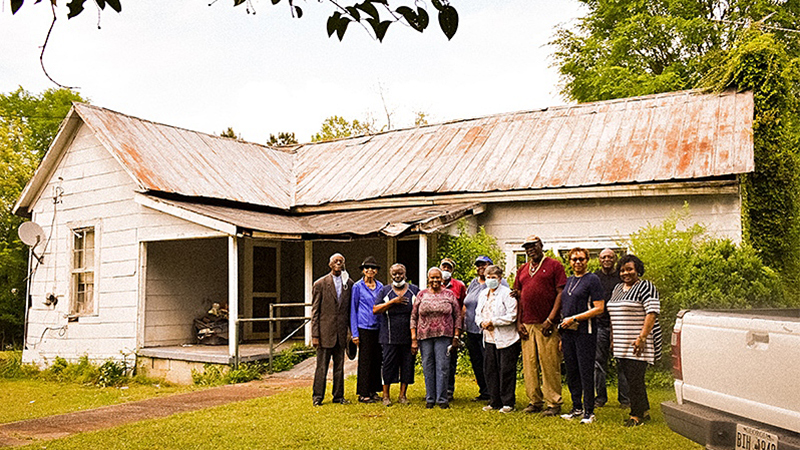 The Green family and friends pose for a picture in front of their old home before it was torn down. The house, which was over 100 years old, had fallen into disrepair. --Shiann Sivell

Oliver Greene remembers two things about the family home he was born and raised in: there was a lot of love, laughter and good food.

Now at the age of 91, he and several members of his family stood on the sidelines as the beloved Greene family home was torn down on April 28, —114 years worth of history going down with it.

Before the heavy machines tore down the home he, his siblings and various other family members were born in, Greene and his family, grandchildren and cousins, held hands on the front yard and thanked God that their family had been brought together because of the home, even if they were grieving at the same time.

“It’s a joyous occasion; it’s a sad one as well, but we thank you for it as well,” one family member said during the prayer.

Greene’s grandfather, Richard Grier, was a former slave who walked from Greeneville to LaGrange and then to Alabama where he heard land was being sold. He then returned to LaGrange to buy the property the Greene home sits on now, and eventually married his wife, Emma Grier, and became a preacher.

Greene said his own parents, Cato and Lula Greene, were affectionately called “Papa Cato and Mama Lula” by Greene’s granddaughter, Bertha Broughton. Berta was born in the house and lived there from ages 13 to 19.

“Papa Cato was a humble man, a Christian man,” Broughton recalled of her great-grandfather. “If he didn’t have nothing but a dime, he’d give it to you.”

Cato and Lula Greene married on the front porch of the Greene home on Dec. 22, 1910. and proceeded to have 19 children, including Oliver.

Though the house was cherished by the family and stories of its history was shared through aged photographs, the house began to fall into disrepair and family members weren’t able to preserve it.

“I wish to God we had known it had gotten this far … we might have been able to restore it,” Broughton said. “It’s gone now … no return.”

The house, located on Hammett St., had two bedrooms, a kitchen, a living room and one bathroom and has not been lived in for roughly ten years, Broughton said.

Broughton recalls falling asleep in the house as a child to the sound of rain on the tin roof.

“You always slept so good with that rain on the roof,” Broughton said.

Another friend, Elizabeth Sims, who Broughton said was practically family has known the Greene family all her life.

Sims would visit the home every Friday afternoon to visit her friend Mable, one of Greene’s sisters, and the house’s living room couch was their sanctuary.

“We’d sit in there and solve all the problems of the world,” Sims recalled.

As the home was torn down, family members went back for pieces of scarps, stones from the century-old chimney and tin from the roof.

Broughton went back and forth around the destruction for the stones, wiping soot from her hands as stacked them in a pile.

She plans to put the stones and tin in her garden, keeping her family’s memory with her forever.

“There’s a lot of history inside this house, and a lot of love,” Broughton said.