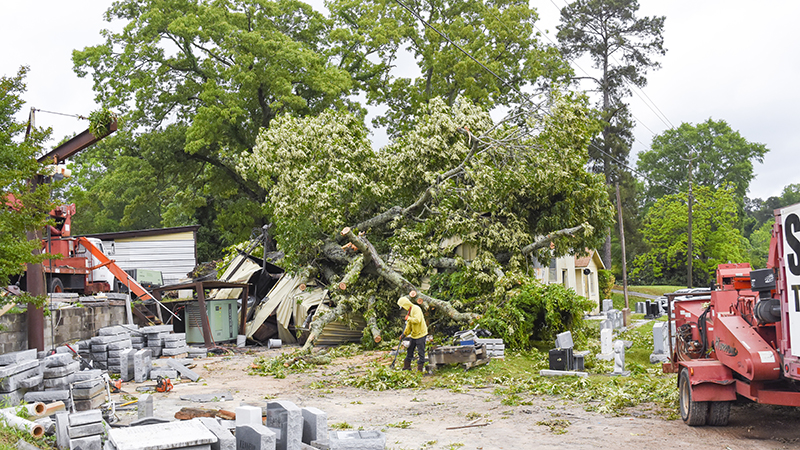 A tree fell on a metal building that’s part of Parmer-Willis Monument Co. Inc. on West Point Road. The damage was due to a storm system that brought heavy winds and rain to the Troup County area.--Cole Trahan

Tuesday evening’s storm probably made many people in Troup County nervous. Fortunately, there was little damage in the area.

“There wasn’t any significant [storm damage],” said Stewart Smith, public information officer with the Troup County Sheriff’s Office. “We just had multiple reports of trees down and power lines down throughout the county, primarily the southern end of Troup County.”

“We had a couple of trees fall on power lines at Troup Street and along Lukken Industrial Drive,” Thornton said. “We had a few scattered power outages, but nothing major.”

Unfortunately for Todd Willis, owner of Parmer-Willis Monument Co. Inc. on West Point Road, his headstone-making business was an exception. Willis estimates it was around 9:30 p.m. when an oak tree over 100 years old crashed into his metal building, breaking completed headstones inside.

“That’s when power was lost and security cameras went off,” Willis said. “It knocked out this whole side of town, and Diverse Power came out here about 10 o’clock. Worked through the night to get all the power off, cause you had quite an explosion from what they said.”

The damage was extensive and expensive.

“We’ve got insurance adjusters coming out this morning,” said Willis, guessing that the damage will cost close to a quarter million dollars.

“The building is a total loss.”

Despite the damage, Willis said his business will be open “as early as this weekend.”

The sales office next door to the damaged building stands unscathed.

“Other than that, we’re sort of waiting on equipment to be restored, cause we’re a production facility here, too. We make the headstones. … We hope our customers will just be patient.”

According to Willis, the damaged building was built in the early sixties, making it the first metal building built in Troup County.

Troup County went under a severe thunderstorm warning around 8 p.m. Tuesday evening.  The National Weather Service in Peachtree City estimates that Troup County received 2 to 3 inches of rain from Monday through Wednesday morning.