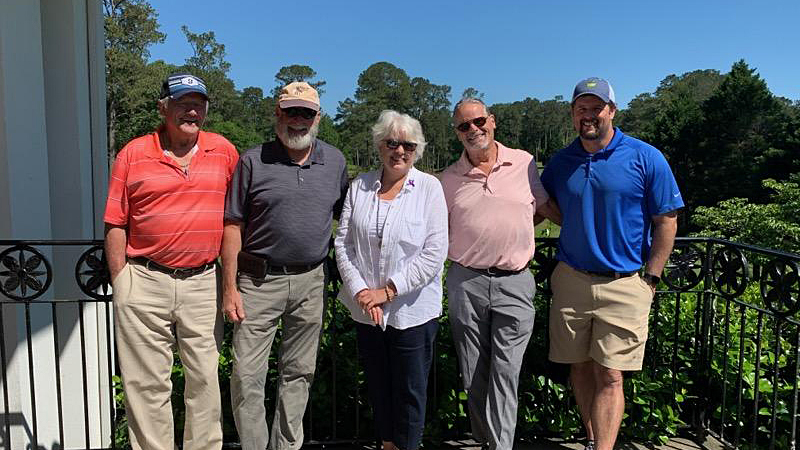 Luke “Bubba” Hill was a beloved member of the LaGrange community for decades and always had a kind word or a smile for anyone he met, according to his wife, Connie Hill.

Hill suffered from Alzheimer’s disease and now his family and friends are working to raise awareness and funding to help others.

Hill’s wife, children and extended friends and family gathered at the Highland Country Club Thursday, four months after he passed away, for a fundraising golf tournament event.

Around the club’s golf course hung banners and posters commemorating Hill’s life and sports reputation as over 100 people created a celebration out of Hill’s memory.

Toward the end of the tournament, bagpiper Michael Scott from Newnan played “Amazing Grace” and “Going Home” before a moment of silence.

His children and friends gave touching acclamations about Hill throughout the day.

Connie recalled that Hill was a “party” sort of man that was kind and good natured to everyone he met.

“He never met a stranger,” she said.

“He had a handshake, a smile and a pat on the back for everyone he ever met. He had the kind of personality where he would treat a janitor at a plant the same way he would treat a CEO of a company.”

He was diagnosed with early onset dementia and Alzheimer’s roughly five years ago and spent the last years of his life in an assisted living memory care in Florida where he and his wife moved.

Before the pandemic, Hill was showered with visits by friends who also comforted Connie.

“I was floored with how many people know of somebody with Alzheimer’s,” she said.

One of Hill’s friends, Jimbo Foster, visited on and off during his illness for lunch or a game of golf. Even though some days would have complications, Foster stuck by his long-time friend.

“That disease is so bad … but I guess it shows the love I have for him,” he said.

Foster and Hill were friends for 40 years, and Foster is still close with the family.

The tournament ultimately garnered over $10,000 that will be split between the LaGrange Alzheimer’s Center of Emory and Georgia chapter of the Alzheimer’s Association.

Connie is interested in holding the event again and bringing more awareness to Alzhemer’s or hopes that someone else whose life has been affected by the disease may want to take the event on.

In the meantime, she’s grateful for the community support, and that her husband touched so many people during his life.

“He touched a lot of lives because he was just a friendly kind of guy … and we have so much love and support here [in LaGrange] because of him,” she said.