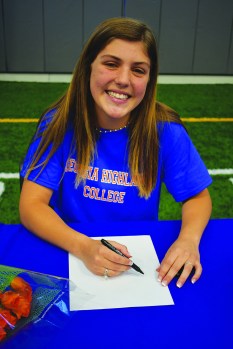 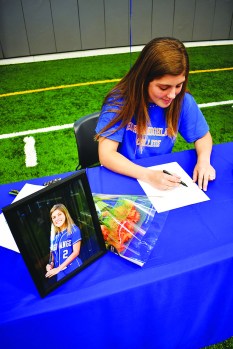 It didn’t take long for the LaGrange High softball coaches to know what they had in Malone Aldridge.

Aldridge showed what she could do as a member of the junior-varsity team as an eighth-grader, and by the time she was eligible to play on the varsity team as a freshman, she was penciled in as a starting outfielder and a leadoff hitter.

That’s a role Aldridge held throughout her high-school career, and she was a big reason why the program enjoyed so much success over the past four years.

Now, Aldridge will get an opportunity to show what she can do on the next level.

Aldridge has signed a letter of intent to join the softball program at Georgia Highlands College, and she’ll be on the team when the season begins next spring.

Aldridge will re-unite with her former teammate at LaGrange, Madison Dennis, who has also signed with Georgia Highlands.

“I had a few offers, but Georgia Highlands felt right,” said Aldridge, who was also a soccer standout at LaGrange. “Madison, a teammate of mine, she’s also going there, so it felt like it would be nice to go together, and I like the idea of it just being two years, and after I can go play somewhere bigger, if I want to do that, or just go to college to be a student.”

Aldridge enjoyed a memorable high-school career, and she had plenty of team and individual success.

Team-wise, Aldridge was a part of a team that reached the final eight of the state playoffs as a junior, and she helped LaGrange make it to the final four last season.

Aldridge ended up playing 124 games over the course of four years, and she posted a .363 batting average with 119 stolen bases.

“I couldn’t be more excited for Malone,” said Jim Reed, an assistant coach on the softball team. “She’s one that I’ve personally coached for four years because she’s one of my outfielders. It’s been a joy for me to get to know her the past four years.”

Aldridge was a part of a special senior class.

Reed appreciates everything Aldridge and the other seniors, brought to the field.

“She’s a big reason, she and the other five seniors, that we were able to go to the elite eight in 2019, and we made it to the final four this past year in 2020,” Reed said. “They were a big part of it, and Malone has been since day one our leadoff hitter, and the person that sparks everything. I’m truly going to miss watching her play the outfield. The good news is, she’s not going too far away, so I’ll be able to travel up and watch her play, and I know the rest of our coaching staff will do the same.”