Thames excited to be THS co-valedictorian, plans to attend UGA 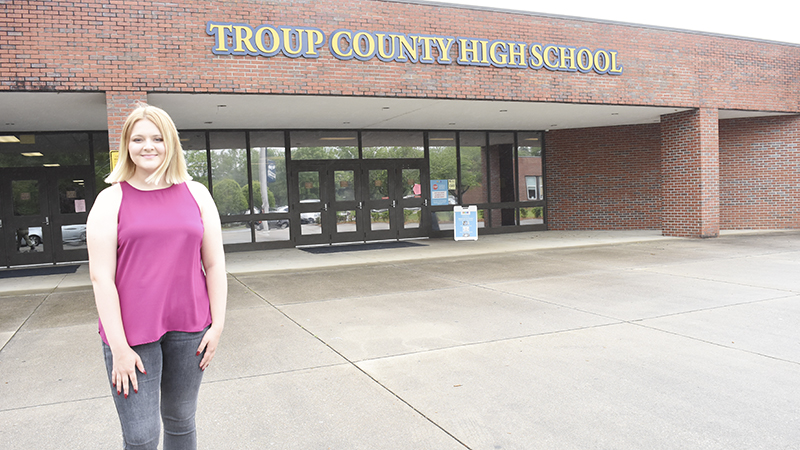 Chloe Thames didn’t expect to be valedictorian at Troup County High School and was surprised when she found out she had earned the honor.

Thames is co-valedictorian at THS with classmate Emilee Johnson.

“I wanted to graduate as a distinguished honor grad,” Thames said. “I didn’t intend to become a valedictorian, and it’s a great feeling, honestly.”

She will be attending the University of Georgia in the fall where she will major in science education. She explained that she applied for multiple colleges, but UGA was her ultimate goal. When she heard she had been accepted into UGA, she literally fell out of her seat.

“I was actually helping do the lighting for the theater department,” Thames recalled. “We had just finished, and I looked at the text from my mom, and she had checked it before I did. She took a picture of the acceptance and was like, ‘You got it!’ And I fell out of the seat in the lighting booth. It was really funny.”

Thames said she wanted to be a high school chemistry teacher.

“I didn’t really know what I wanted to do up until like my sophomore year, and that’s when I took chemistry, and met two of the teachers that have had the biggest influence on me for choosing this. It was actually probably the furthest thing from what I would have wanted to do as a freshman. But when I took chemistry I knew I wanted something to do with that. It was just something I instantly became interested in and very passionate about.”

Thames explained that when she joined the Troup Ambassadors and became part of a leadership class, she and others did a lot of work with elementary schools.

“We would go Tuesday mornings, and we would help out classes. It really showed me that I loved teaching,” she said.

One of the two teachers who influenced her career decision is Michelle Ashmore, who taught Thames in the aforementioned leadership class, taught her AP government, and is head of the Troup Ambassadors. The other is Danny Beasley, who taught Thames regular chemistry and AP chemistry.

“They’re both very positive influences, not only in my life and in the lives of the students that I teach,” Thames said. “They’re just two incredible teachers, and I’ve had the pleasure of having them for more than one year.”

Thames wasn’t always the superstar student she is now.

“Freshman year, I was very antisocial. Didn’t really like doing anything. I just kind of wanted to get through high school, have good grades, all that,” Thames explained. “But when I joined the leadership class and stuff sophomore year, that as a whole … it’s just shaped me into a much better person.”

Thames explained that doing community service showed her that she enjoyed helping people and teaching.

When asked what advice she’d give underclassmen, Thames said they should stay focused.

“If you stay focused and do your work, it’s a lot easier to get through high school,” she said.

Thames said she ran cross country and joined the golf team this year.

“I have been on the swim team for four years and was co-captain of that this year,” Thames said.

She is also the president of her high school’s Skills USA group. In the Skills USA group, she recently received first place in a screen-printing technology competition at the state level. Thames has also taken part in Interact and the National Honor Society.

Her biggest source of support were her parents, Stephanie and Bo Thames.

“My mom comes to everything for me, and my dad comes to what he can,” she explained. “But my mom has been to every swim meet that I’ve ever been to. She was the president of the Booster Club for the swim team to make sure that she could get everything done for that. She came to every little golf match. Even if I wasn’t paired up with someone, she would follow us around on the golf course … Sophomore year, when we were doing all the stuff with the Ambassadors, she would rearrange her work schedule so she could take me places since I couldn’t drive yet. She’s always encouraged me to have good grades, even since I was in elementary school.”

She was born in Columbus but spent her early childhood in Phenix City, Alabama. She moved to LaGrange when she was three.

As for her favorite pastime, Thames said she enjoys baking.

Last week, in celebration of May 4, she made gingerbread that looked like Chewbacca from Star Wars.