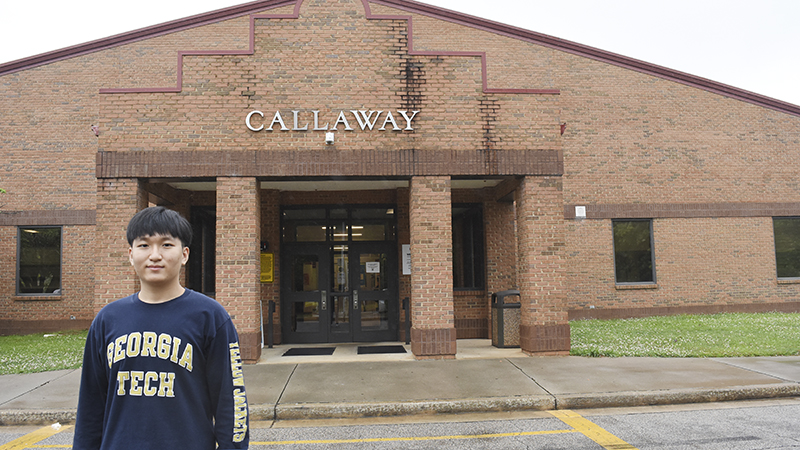 Saeam Shim has been named Callaway High School’s valedictorian. Shim, who was born in South Korea, credits his parents for their support. --Cole Trahan

This year Callaway High School’s valedictorian is also its STAR student. Impressively, Saeam Shim earned these titles despite knowing little English when he came to LaGrange in 2017.

“Before I immigrated to the United States, I lived for like 15,16 years in Namwon,” he said. “And after I moved here, I’ve only lived in LaGrange.”

Shim says the main reason his family moved to LaGrange was because of his dad’s job. However, he says that his dad, Jaeyoung Shim, gave him and his brother the option of staying in Korea or moving to the United States.

Shim’s mother is Mijeong Kim, and he also has a brother at Troup High School named Saebyeok Shim.

Shim credits his parents as being his biggest source of support.

“They always thought of me first,” he explained. “They always supported me and my brother. And because of that, I could do whatever I wanted to do because [of] their dedication and their support… they always listened.”

Shim plans to major in electrical engineering at Georgia Tech. He said he chose that major partially because it’s “used everywhere.”

“I didn’t know anything about English,” he said. “But as you know, the math and the science — the principles and concepts — are commonly used in the world.”

He explained that because he had already learned math and science concepts in middle school in South Korea, he was able to do well in math and science classes at Callaway despite knowing little English. He found that he enjoyed those subjects.

“And I thought about, ‘Well, what can I do after graduating from high school?’ And then I realized that engineering would be the best for me. And then, Georgia Tech is definitely one of the best engineering schools,” he said. “That’s why I chose Georgia Tech.”

Shim is interested in doing research on car batteries or medical robots. Right now, he said he’s leaning toward medical robots. He gained an interest in them after talking to a friend a few weeks ago. Though he doesn’t want to be a doctor, he likes the idea of being able to help people with their medical problems.

As for car batteries, Shim said he has an interest in protecting the environment.

Since batteries don’t hold their charge for long, Shim would like for there to be ones that hold a charge longer and need less electricity to charge.

When asked about his most positive experience at Callaway High School, Shim said he appreciates the school’s strong sense of community.

“In South Korea, there was not such a community. There’s a community, but here, we value the community more,” Shim said.

Shim said he wasn’t worried about his language barrier, as he knew people would help him.

“I’m an optimistic person,” he said. “The one thing is, whenever I need help, everyone here tries to help me,” Shim said. “I knew that I wanted to do well on everything, but I couldn’t because of the language barrier. The teachers help me. My friends help me.”

“In tenth grade, I first met Mr. Curtis in his advanced chemistry class. It was my second year of school life here, and I was still not familiar with new classes and classmates,” Shim said. “Though I knew little about English and chemistry initially, he inspired me to improve.”

Shim said he appreciated how passionate Curtis was in his teaching.

“Mr. Curtis’ passion for education and his field of study have been primary factors in his effect on me as a major role model in science,” Shim said.

Shim has been involved in several extracurricular activities, including Key Club, math club and a Korean-American culture club.

Shim said he felt Callaway had prepared him for college.

“It’s, like, amazing that we can take the college level classes in high school,” he said. “I think that those experiences will help me to prepare for actual college classes.”

And when asked what advice he’d give to underclassmen, Shim explained that other students had a significant advantage over him because they were fluent in English.

“If they find what they want to do and then make a plan and then try their best to achieve their goals, then they will be fine because they are ahead of me.”

Shim says he used to play video games, but these days, he’s more into watching sports and songwriting. Shim also knows how to play some musical instruments.

For direction in life, Shim leans on his faith.

“Whenever I sought help, I prayed to God,” Shim said.