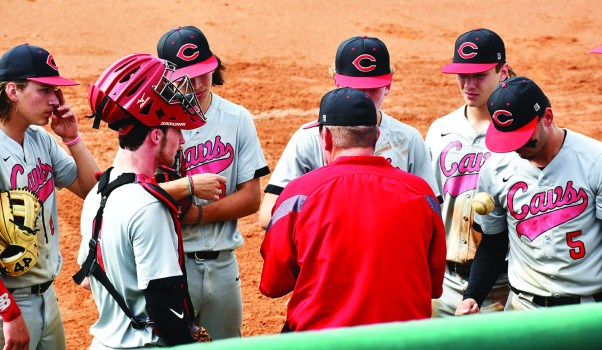 They’re not done yet.

The season looked like it was over when the Callaway Cavaliers lost to Thomasville 6-0 in game three of their Class AA state-playoff series last week.

Turns out, the Cavaliers have more baseball to play.

Thomasville has had to forfeit its game-three victory because one of its pitchers exceeded the number of pitches allowed in a playoff series.

The situation came to light on Saturday, and later in the day it was confirmed that Thomasville would have to forfeit the game.

That means Callaway will play Jeff Davis in the Class AA semifinals with a spot in the championship series on the line.

Jeff Davis will be the host team, and they’ll play a doubleheader on Monday beginning at 4 p.m., and if needed, a third and deciding game would be on Tuesday.

The winner of the series advances to play Bremen or Lovett for the Class AA state championship.

“We’ll go down Monday, and try to get after it and do what we can,” said Callaway head coach Dusty Hubbard.

Hubbard stressed that the events that led to the forfeit had nothing to do with anyone associated with the Callaway baseball team.

“This was not by any means us,” Hubbard said. “This was something brought to the GHSA through people who contacted them, and they did their own investigation.”

While understanding how difficult a situation it is for the Thomasville players, Hubbard doesn’t want his players to feel guilty about being here.

“You can’t apologize for that. It’s not anything we did,” Hubbard said. “We’re glad to be here, and we’re going to go down and compete.”

Callaway has played Jeff Davis once this season.

Starling will likely get the start in game two against Jeff Davis, while Justin Moore will probably be on the mound for game one.

Callaway, which finished second in Region 5-AA, beat Union County and Pepperell to reach the third round.

After splitting a doubleheader with Thomasville on Wednesday, Callaway lost game three, only to find out two days later that the game was forfeited.

If Callaway and Bremen both win, it will be an all-Region 5-AA showdown for the championship.

“We’ll go and play and give it our best effort,” Hubbard said. “Hopefully we can figure out a way, and if Bremen figures out a way to beat Lovett, then we’ll play a 5-AA championship series.”