LaGrange Academy valedictorian to broaden his horizons at UGA 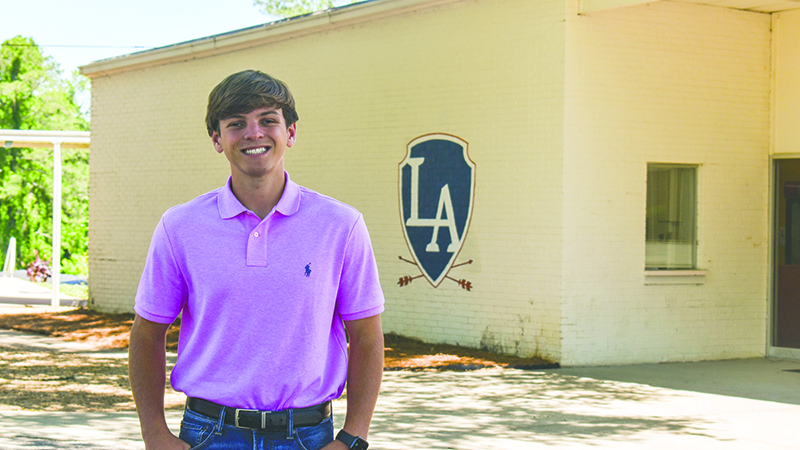 LaGrange Academy valedictorian Silas Liechty poses for a photo at the school. Liechty plans to attend the University of Georgia. --Shiann Sivell

After a long battle of deciding whether to attend the University of Georgia or Auburn University, Silas Liechty is ready to take the next step of his life at the home of the Bulldogs.

Attending a university of over 40,000 people will be a new challenge for the LaGrange Academy valedictorian, who has spent the past 13 years of his life in a classroom with less than 15 other students. The school has 251 students and Liechty’s graduating class only has 10 students.

“I’m ready but a little worried at the same time,” he said. “It’s going to be quite a different experience, and I’ve never been away from home that long before.”

However, Liechty is not unaccustomed to new challenges.  Liechty started kindergarten half a year earlier than his peers, and at 17 has since been the youngest in his class throughout the majority of his academic career at LA.

“It was a little different, especially when I was younger,” Liechty said. “But we’ve all been together for so long now it doesn’t bother me anymore.”

Liechty plans to study business management while at UGA, a decision he said his business-savvy family helped encourage him to do.

“Since I was younger, my family has always owned some kind of business,” Liechty said, adding that he always helped his family run their businesses. “I developed a pretty good passion for it after watching them … it’s something I want to continue when I get older.”

His family currently owns the Nutwood Winery in LaGrange. Liechty also expressed an interest in minoring in history, his favorite subject at LA, as well as possibly taking up intramural sports and participating in some Christian organizations. Luckily, a few friends of his plan to attend UGA as well, one of whom he plans to room with, bringing a bit of home to Athens.

“I’m glad I’ll have some connections there before I get started [at UGA],” Liechty said.