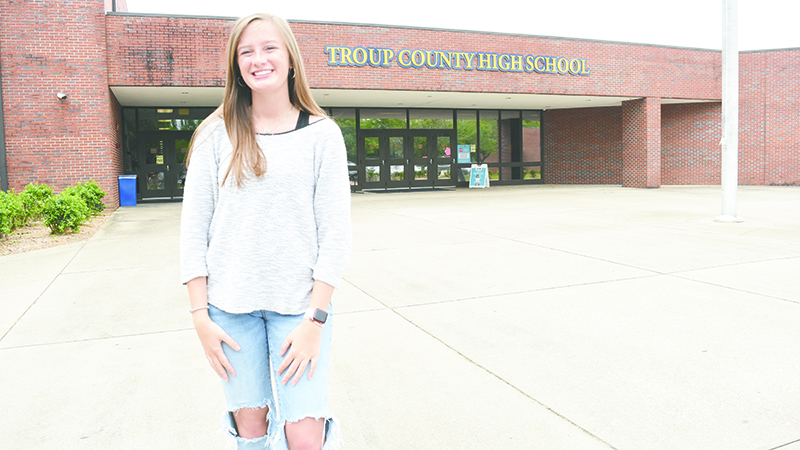 As the spring semester ends at Troup County High School, Emilee Johnson is reflecting on her experiences at the school and is looking forward to life after graduation.

Being one of her school’s two valedictorians along with Chloe Thames, Emilee feels empowered to chase her dreams.

“It’s really an amazing experience just to know that everything I’ve always worked for has come together and made everything possible,” she said.

Johnson said she was excited to be the school’s valedictorian.

“Not something that I ever thought that I would do … it’s just an amazing experience,” Johnson said.

Johnson isn’t completely sure what she’ll say in her graduation speech but has a basic idea.

Johnson said that her parents, Allen and Samantha Johnson, were her biggest source of support.

“My mom actually works here, and she’s always pushed me to do my best and encouraged me to continue what I started when I was little,” she said. “And I’ve always made all As, done really well in school. And she and my dad have really pushed me to be the best I can be.”

Johnson’s mother works at Troup County High School as a math teacher and graduation coordinator. Johnson thinks it’s “really cool” to have her mother so close by and sees her frequently.

“It definitely brings us a lot closer together,” she said.

Other than her mom, Johnson said that the most influential person in her life at Troup County High School was Coach Lynn Kendall, who teaches AP psychology.

“He was a phenomenal teacher,” Johnson said. “But in addition to that, he’s always been one of my number one supporters and always been the first one to congratulate me for anything I’ve ever accomplished, the first one to be there cheering me on whenever I’m doing something. He’s just an all-around great person.”

“He is a phenomenal teacher and [an] even better man,” she explained. “Mr. Giddens really helped me find my love of history and know that I wanted to obtain a minor in history…”

When asked what had been her most positive experience at Troup County High School, she said it’s the closeness of the school.

“Honestly, probably just the family atmosphere and the fact that everybody cares,” she said. “And it’s just very motivating.”

Johnson was involved in several extracurricular activities. She played softball, was involved in about eight clubs and participates in Troup Ambassadors, a peer leadership program.

Johnson plans to get a minor in history at Southern Union State Community College and pursue a major in education at Jacksonville State University.

“I’ll be doing concurrent enrollment at Jacksonville State while I’m at Southern Union,” she said.

Johnson said she had originally intended to go to Mississippi State University.

“But, then I started looking at financial aspects and all the scholarships that I was getting, and I decided to go somewhere a little bit closer to home where I definitely knew that I could get a good education while still not putting myself into a bunch of student loan debt,” she said. Johnson also said it would be “a lot more manageable” for her to work while taking classes at Southern Union than it would be at Mississippi State.

Johnson says she wants to be an elementary school teacher, although she isn’t sure where she’ll teach. She said she chose this career path because elementary school years seem to be so influential in children’s lives.

“I just think that as an elementary school teacher, we can have so much impact on a child and their love of learning, and I really want kids to have that same love of learning that I did,” Johnson said.

As for a piece of advice she’d give underclassmen, Johnson recommends joining clubs and forming relationships with teachers and other students.

“They’re going to be your biggest support system when you go through high school,” she said.

Johnson was born and raised in LaGrange and has a younger sister named Lyndsee.

In her spare time, Johnson loves playing softball, painting, and doing “anything that has to do with being outside.”