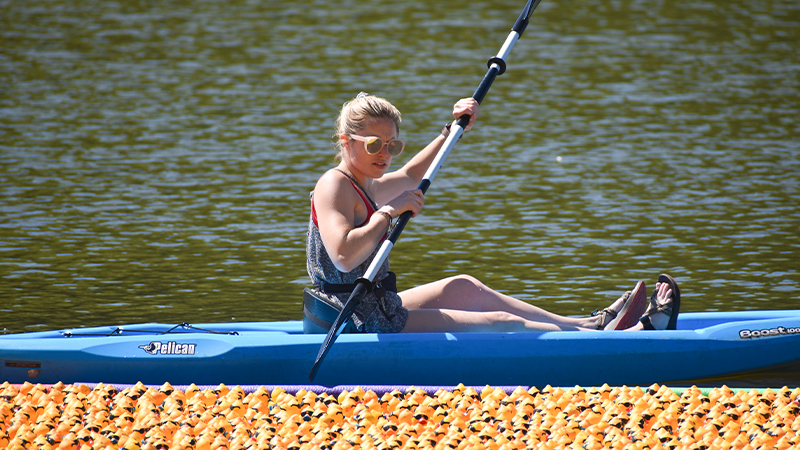 A volunteer kayaker with the Calumet Center stands by to throw ducks back into their loop. --Shiann Sivell

“We went through plans A, B, C and D … you live and you learn, and we’ll try again next year,” said Kevin Goodson, director of development for the Calumet Center for Healing in Attachment, when the decision was made to pluck 30 rubber ducks from the lake after over half an hour of complications.

Michele Bedingfield, one of the heads of the CCHA, paralleled the mishap as the same sort of issues the women in the CCHA’s program go through.

“No one plans for disaster,” she specified.

“[Our women] don’t plan to be traumatized … and to be picked up and thrown back into their bad habits.”

Bedingfield also noted that the women have support as well, just as the center did when the race got out of hand.

“If you have the support of your family and friends, they put you back on track,” Bedingfield said.

The fundraising event, led by the CCHA, focuses on substance use education and awareness and is designed to target families with children.

“We help by bringing down barriers that would prevent them from moving forward,” Bedingfield said. “Those barriers could be employment, building relationships between their family again, transportation … but the main goal is to help them thrive.”

The theme of the event was “Don’t be riduckulous! Don’t do drugs!”

The top 15 ducks were chosen, all of whom would receive a grand prize.

The first place winner for the $2,500 grand prize was Andy Pennel.

Sponsors for the event also received certificates for their monetary donations to the event.

Chatty LaGrange Women, an area Facebook group, won the “Top of the Flock” award for donating the most ducks for the event, a total of 726.