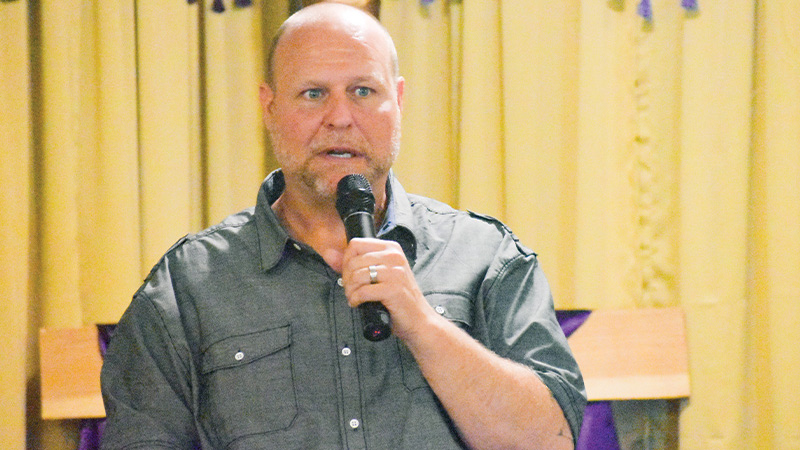 Pastor Autry White spoke at a recent “There is Life after Incarceration service.” --Shiann Sivell

LaGrange native Autry White didn’t go to college or any kind of ministry school to become a pastor. He wasn’t even brought up in church as a child.

In fact, White spent 18 years in and out of prison, usually with an assortment of drugs in his pocket. He went back and forth with the struggle to change his ways and walk with a higher power before he landed his pastorship at LaGrange’s Freedom House. He said he’s been drug free since 2010.

“I liked [prison] so much I went six times,” White told the congregation at the Calvary Cross Learning Center’s  Prison Ministry’s “There is Life after Incarceration” service. “I sat around and gambled and did drugs and drank all the time … I didn’t mind going so much because I could continue doing what I was doing in there what I was doing out here.”

White said he began selling drugs at the LaGrange Boys Jr. High School when he was about 15 and said with certainty that he was the first white man to sell crack cocaine and ecstasy in LaGrange in the 1980s.

“No one had ever heard of it before … I had to promise people to give them their money back if they didn’t like it,” White said.

After his first go-round at Arrendale State Prison in Alto, he managed to stay out of prison for nine months. He even met his future wife, Angie, at a Hogansville grocery store in 1994. But White soon returned to his old habits and wound up in an Alabama county jail that only fit 30 inmates altogether.

It was at this jail that White said he was first born again, but not because he went to church or heard the message from another source

“I got born again by crying my eyes out asking God to kill me because I couldn’t take it anymore,” White said.

God did what White asked him to do, he said.

“He killed me because that person doesn’t exist anymore,” White said. “…he demolished me, and it hurt, and he’s still working on me.”

After serving four years at another facility, White returned to LaGrange and led officers on a high-speed chase. He had shot up drugs just before the chase and robbed two stores.

Despite being trapped, White and the driver of the car had managed to escape.

White’s went back to jail four times more. During these times he did jail, prison and rehab ministries all while he struggled with drug use.

His major turning point was in 2000, after White went to prison for the third time on meth charges.

At this time, White said he truly stuck with religion and “began to walk with God” more closely than he had before and said he began to have dreams and visions.

During a jury trial, White was sentenced to 25 years with no parole.

“I just decided I didn’t want to do it,” White said.

White had plans to break out, and said he recruited a guard at the facility to help him. The nights before White was to break out, he had a series of dreams in which he was in a car and he could not see the driver.

“I was in the backseat of that car and the person driving was invisible to me,” White said. “We’re in this pasture and [the driver] hits the emergency brakes and slides through a wooden fence, the woods … and I just knew I was going to die. We hit a tree and we bounced off it.”

In White’s dream, he saw a purple line under the car, similar to a directional line on a GPS, which he kept following throughout the course of the dream.

After waking up, White prayed, asking God the purpose of the dream, and after coming to a conclusion, declined to break out of jail.

Afterwards, White’s 25-year sentence was dramatically reduced to 15 years and then with an addition of parole eligibility after eight years and six months.

Several more reductions followed until White made parole after 38 months. After five years, he maxed out his sentence completely.

In 2017, White went through a five-month period that was one of the darkest moments of his life.

“My ministry partner had betrayed me … she tried to take over what God had led me to do,” White said.

In December, however, he soon received a call from a pastor in another town who offered him a place at the church he just bought, though White hadn’t been his first choice.

The building needed work, White recalled, and in January 2018, White opened what is now Freedom House on South Greenwood St. He pastors it with his wife, Angie, and still shares his story to inspire others to turn to religion.

He still fights with the devil, he said, but he walks closer with God now.

“It was hard, but it was worth it,” White said. “Everything that happened to me, whether it be by my own doing … I needed every bit of it.”