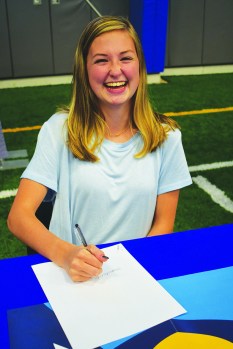 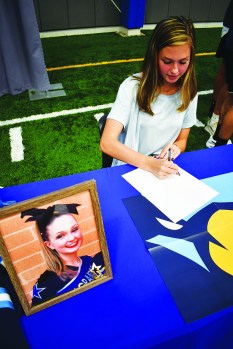 Baker is headed to Point to join the competitive cheerleading team, and she’ll also be a member of the spirit squad, so she’ll be on the sidelines for football games in the fall.

Baker, who was a key member of LaGrange’s competitive cheerleading squad, celebrated her decision during a ceremony in the Steve Pardue indoor practice facility.

As a senior, Baker helped lead LaGrange to an eighth-place finish at the Class AAAA state competition in Columbus.

Baker was a flyer, meaning she was one of the ones soaring into the air during LaGrange’s routines.

The Grangers came a long way from Baker’s freshman year when the team didn’t even participate in the region competition because of a lack of numbers.

By the time Baker was a senior LaGrange had reclaimed its place as an elite cheerleading program.

“My freshman year, a lot of people quit, and my sophomore year coach (Mike) Pauley came in and tried to build us back up,” Baker said before the state competition. “My junior year and my senior year we made it to state, so that’s really exciting.”

Pauley, who coached Baker the past three seasons, said the signing is a result of a lifetime commitment.

“If you’re a competition cheerleader, you start when you’re little-bitty,” Pauley said. “She’s been cheering since she was a little, all the way to know now when we’re sending her off to Point University.”

At LaGrange, Pauley said Baker was “one of the most improved cheerleaders that we’ve coached in the last several years.”

Pauley read a message from Mitzi Norton, who was LaGrange’s spirit cheerleading coach.

After being introduced by Pauley, Baker spoke, and she offered her gratitude for those who helped her reach this point, including assistant coach Sarah Kate Cadenhead.

“I would like to thank my family, and my friends, and everyone who came,” Baker said. “I’d like to give a special thanks to Sarah Kate, because if it wasn’t for her, I wouldn’t have taken this opportunity.”