Shop opens in honor of family member who battled cancer 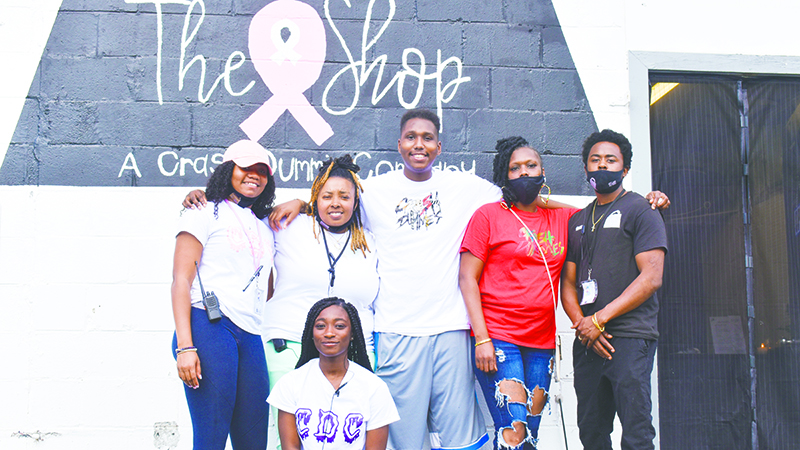 When Lateah Walton’s cousin, Darryl Fields, beat his battle with brain cancer, she was inspired to open her own shop to commemorate his victory.

“It’s a blessing, but she surprised me,” Fields recalled when Walton told him the shop was opening in his honor. “I wasn’t expecting it … she never said it was for me. She made it seem like it was for [the family.]”

Walton opened her business, The Shop: A Crash Dummy Company, two weeks ago, and commemorated the occasion with a family get together and a ribbon cutting.

The shop offers a variety of clothing from other merchants in the area, including Walton’s own wristband and clothing line called Crash Dummy, which she started in 2016.

“It basically says that no matter what life throws at you … just keep going,” Walton said of the business name.

Walton began performing rap music around the same time as well, and Fields would be her hype man and rap with her, she said.

Around the time when they were beginning to take music seriously, Fields became sick.

Fields, who was 19 at the time, would suffer from migraines and have trouble standing and speaking. After several trips to the hospital, he said he was diagnosed with two brain tumors.

“When I got up there to the hospital, I’d ask God ‘why me’ … then I’d see the kids that were there, and I didn’t ask that question anymore,” Fields said.

Fields underwent radiation to shrink the tumors and went through intensive physical therapy and rehab to help him relearn to walk. Fields, now 24, has now been in remission for three years and has a slot in his head that drains fluid off his brain.

“I didn’t want him to feel disabled,” Walton said. “He’s young. There’s so much more to life than being confined. I didn’t want anyone to make him feel like it’s over. If they tell him he can’t get a job, I’m going to make one for him.”

Due to the pandemic, Fields hasn’t been able to work at The Shop as much but still visits and spends time with his family there on occasion. Other family members as well help out with the business.

“We’re big on family,” Fields said. “The family got me through all of this.”

The Shop: A Crash Dummy Company is located on 1224 New Franklin Rd.