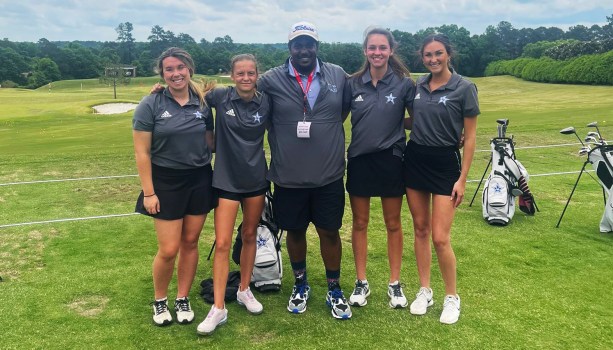 LaGrange High’s Sydney Ormsby put the finishing touches on a memorable high-school career with a fifth-place showing at the Class AAAA state golf tournament in Athens.

Ormsby, competing on a challenging course that is the home of the University of Georgia golf team, posted scores of 80 and 81 to earn a top-five finish.

After shooting a team score of 312 the first day, LaGrange improved and posted a 300 on day two to move up the leaderboard.

Each team had four players, and the top three scores counted toward the team total.

“I was really proud of them and their ability to let Monday be in the past,” said LaGrange coach Isaiah Whitfield. “We improved a lot on day two.”

For Ormsby, it was a busy spring.  Ormsby was a standout player on the LaGrange soccer team that finished second in the region and reached the second round of the state playoffs.

While most of Ormsby’s effort was devoted to soccer, she still found time for golf, and she placed second in the area tournament before earning a fifth-place finish at state.

“I had her for six total practices the whole year, and she shot 80 and 81 (at state),” Whitfield said. “There was a lot of great golf being played, and she got to compete with the best.”

While Ormsby delivered a strong showing at state, she believed it could have been better.

“I felt like that was probably the worst score I could have had,” she said. “I felt like I played better than my score. I probably had two bad holes that kind of messed me up.”

One of those bad holes came on the final hole of Monday’s first round when Ormsby lost the ball on her tee shot, leading to a double bogey.

“I doubled the last hole to shoot an 80,” Ormsby said. “That was unfortunate. If I’d made a par, I would have shot a 78 the first day, and would have been three back.”

Another part-time golfer, Sam Cottle, had rounds of 113 and 110, and her score counted both days.

Cottle was also a key member of the soccer team, and she was the second-leading scorer behind Ormsby.

The scores were high, but the players hung in there and came away with a top-10 finish.

“They did everything they could,” Ormsby said of her teammates. “That course was tough. If you don’t play golf a lot, there’s really not a lot you can do on that course.”

Ormsby is headed to Columbus State where she will be a member of the soccer team, and she may also play golf at the school.

“I talked to the soccer coach about it maybe being an option,” Ormsby said. “I’m definitely not closed off to it. It’s a possibility.”