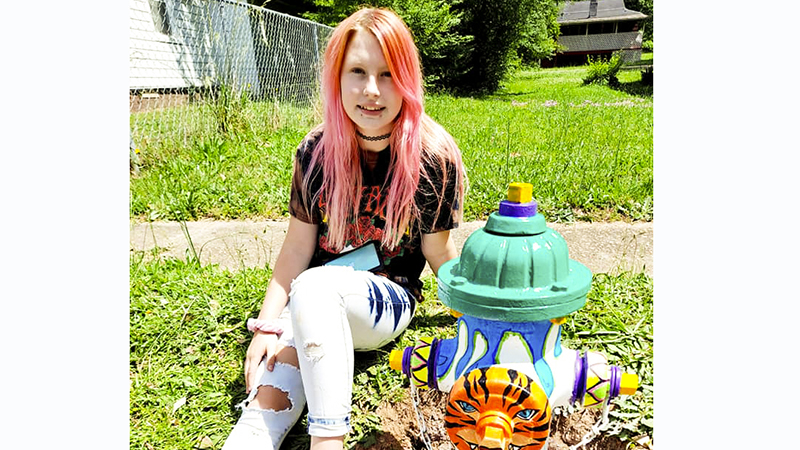 Lydia Bruce worked hard on her Jungle Design on a fire hydrant on Askew Avenue in Hogansville.  --Contributed

All artists have to find their own medium when it comes to art. Several volunteers in Hogansville have found it in the town’s fire hydrants.

Volunteers through the Hogansville Regional Arts Association have been cleaning and repainting the fire hydrants around the town since April 2020, and have cleaned and revitalized 45 hydrants in the Hogansville area ever since.

The project was on the HRAA’s list of ways in helping beautify Hogansville along with getting the community involved, said Jackie Lloyd-Terrail, facilitator for the project.

“It was a project that we talked about doing for a very long time, and the city was kind of on the fence about it,” Lloyd-Terrail said. “It was really a push from the community, and since we were all locked up [because of the pandemic,] we could be outside and have something to do.”

The project is being completed entirely by volunteers who prep and clean the hydrants before they are painted, Lloyd-Terrail said. Volunteers come from as far as Senoia or as close as Hogansville and LaGrange.

HRAA is currently working to create a walking tour map so tourists can find the hydrants with ease, she added.

The organization is particularly focusing on painting hydrants on Hogansville’s west side after several hydrants were replaced recently.

As the hydrant project continues, HRAA also focuses its effort on preserving the Royal Theatre and is planning murals to be installed in the future.