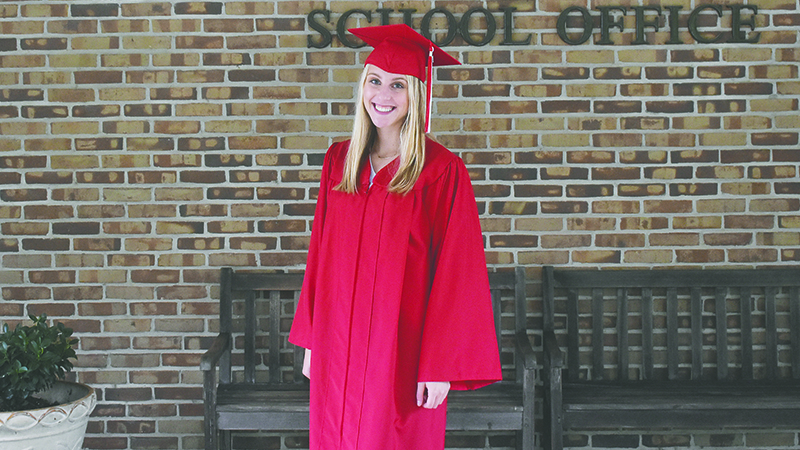 On Sunday, LaGrange resident Amber Franklin was coming home from a Mother’s Day lunch with her family. During the car ride back, her mother looked at her phone and started laughing with excitement. Franklin’s mother broke the news to her — she had been named Springwood School’s 2021 valedictorian.

“I was excited. I was really happy about it,” Franklin said. “[Her mother’s laughter] wasn’t the reaction I expected, but she was really excited. I was very happy, but then I got really stressed out about the speech. I feel better now. Everything is processed and I feel prepared.”

Franklin has attended Springwood since she was in the second grade. For her, the best part of the past 10 years at Springwood has been becoming a family with her classmates.

As a high schooler, Franklin has been involved in various activities at Springwood.

Throughout her high school career, Franklin was a member of the Springwood cheer squad, finishing her career as a captain.

In November, she was named to the AISA All-Star Cheer Team. She also played soccer this past year, helping the girls’ soccer team win the program’s first game and reach the playoffs for the first time in school history.

She also participated in the Wildcats’ yearbook staff, math team and scholars bowl and was a founding member of Springwood’s Leo Club, part of the West Point Lions Club. She also is the 2021 class president.

“I love to cheer,” Franklin said. “I think that was the most hands-on for me, and it was a year-round thing. Being able to be the spirit for the school and be at every event was good for me personally. Being class president was nice because you get to have a hands-on role with everybody. You get involved in the decision-making, and you make sure everyone’s needs are being met.”

Franklin will attend Southern Methodist University in the fall, double majoring in biology and health and society with a minor in psychology.

She will graduate with her 35 classmates on Saturday, May 22 at 9 a.m. on Springwood’s football field.