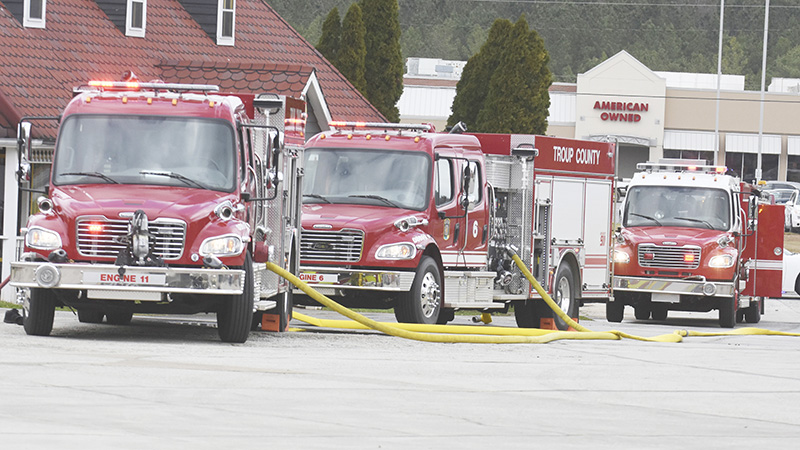 For the second time in a week, the Troup County Board of Commissioners voted to pass a new version of a Service Delivery Strategy proposal during a special called meeting on Monday night. A fire services agreement, which goes hand in hand with SDS and has been the focus of negotiations, was also passed.

Now, Hogansville and LaGrange will review the SDS document and consider whether or not to pass it. If both do, then the SDS proposal can be submitted to the Department of Community Affairs, ending a drawn out negotiation that has drug on since last summer.

Following an extended executive session Monday that lasted over three hours, the commission voted unanimously to accept the proposed SDS agreement with several amended attachments. The biggest is that the county would not require Hogansville to pay for fire services for the first two years of the agreement, a savings of almost $400,000.

As of July 1, 2023, Hogansville would pay the originally agreed upon rate of $195,000 per year, according to County Manager Eric Mosley.

“Ultimately, if the county had to go out and build a new fire station, that’s money that we’re taking from other places,” he said. “And so, if we can keep the fire station where it’s at that’s certainly mutually beneficial for us to do so. We have a 20-year relationship to that fire department. And we really have no intentions of leaving unless we’re asked to leave. We believe that by offering them this deal that we make it that much sweeter for them at this point.”

SDS is a 10-year agreement required in all of Georgia’s 159 counties. For it to pass, SDS requires the county, the largest city (LaGrange) and 50 percent of the other municipalities (West Point or Hogansville) to pass it.

The deadline for an agreement is June 30, but it has to be submitted to the Department of Community Affairs, which requires a 30-day review process. An original deadline was set for the fall, but that was moved due to COVID-19. A second deadline was the end of February, but right at the last minute all four entities agreed to extend the previous SDS through June.

The extension passed in February allowed local governments to avoid sanctions, which would impact state-funded grants, and allowed for more time to negotiate. However, if the June deadline comes and goes, sanctions would again be on the table.

For the last few months, negotiations have been down to Troup County and the cities of Hogansville and West Point, as LaGrange and the county agreed to terms in February and even passed proposals at that time. The Hogansville City Council also passed an agreement at that time with the stipulation that West Point had to agree before Mayor Bill Stankiewicz could sign. Stankiewicz then vetoed it. Over the last few weeks, negotiations have focused on the county and Hogansville.

Under the county’s newest proposal, a termination agreement within the fire services proposal was tweaked as well. Under the county’s proposed agreement, the county could terminate the agreement after giving 12 months notice to Hogansville if an action is filed by any Troup County municipality seeking the establishment of an unincorporated fire service district. That’s a change from Troup County’s proposal last week, as well as different wording from Hogansville’s proposal passed last week.

Troup County has argued in the past that if the SDS agreement was not signed that it may not be able to afford to provide fire services in Hogansville. At one point, the county even sent Hogansville notice it was ending its fire services agreement, though that decision was later reversed.

Mosley said the county is able to provide Hogansville two years of fire services savings due to two factors — an increase in local option sales tax (LOST) — and allocating funds to Hogansville that were originally set for West Point. Mosley said under the new proposal, roughly $100,000 that would’ve gone to West Point for recreation and another $100,000 that would’ve gone to the Hawkes Library is now being reallocated.

“We certainly could not have imagined that we would have seen the growth in our community that we have and we certainly are seeing a lot a lot of new homes, a lot of new residents … so those are now spilling over into funding mechanisms that are allowing us to do this,” Mosley said.

Hogansville Mayor Bill Stankiewicz said Tuesday morning that the city’s attorney was reviewing the county’s documents and that the council would ultimately make the decision on whether or not to accept the proposal. However, he did say that he felt like the county was negotiating in good faith. Stankiewicz also said the agreement isn’t perfect and that there has been a lot of give and take.

“I have to say that virtually everything that the city has asked for in this last round of negotiations. the county has been willing to give us,” Stankiewicz said.

The City of LaGrange may discuss SDS on Tuesday night at its regularly scheduled council meeting. Stankiewicz said Hogansville will hold a special called meeting Wednesday at 5 p.m. to discuss SDS, so if LaGrange and Hogansville approve it, then the SDS discussions would be over. LaGrange does not have to sign the fire services agreement since that document is only between Troup County and Hogansville.