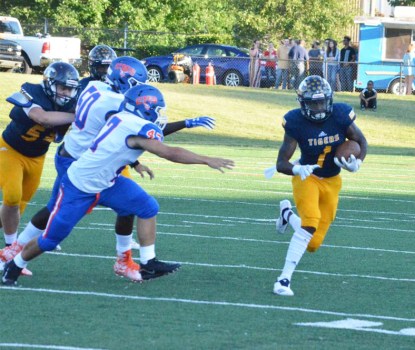 Former Troup Tiger Tyree Carlisle, who was a key member of the 2018 team that reached the state semifinals, has found his new college home.

Since 2019, Carlisle has been playing for Independence Community College in Kansas, and on Tuesday he announced that he has committed to The University of Tulsa (Okla.)

As part of his official announcement on Twitter, Carlisle said he “put in the work, I trusted the process and most of all I grew up and overcame all the obstacles that were thrown my way.”

Carlisle was a standout player at Troup, and he excelled as a defensive back and running back.

During the memorable 2018 season when Troup went 12-2 and made it to the Class AAAA semifinals, Carlisle ran for 628 yards with 10 touchdowns.

Carlisle got his opportunity to play this spring, and he appeared in three of Independence’s six games and had three tackles.

In the season opener against Butler Community College, Carlisle had two pass breakups.

While Carlisle’s playing time at Independence was limited, he was grateful for the opportunity.

“I would like to thank coach (Jason) Martin and the staff for believing in me and giving me a chance to not just become a better athlete but a better man,” Carlisle wrote.

“Special thanks to coach Buckels, and coach Everett for giving me this opportunity to showcase my talent on a bigger stage and at a higher level and now it’s time,” Carlisle wrote.

Another former Troup player who has been at Independence Community College since 2019 is linebacker Joko Willis, and he has signed with Auburn University.

Like Carlisle, Willis didn’t play in 2019, and his first opportunity to get on the field came this spring.

Willis played in five of the team’s six games, and he had 10 total tackles and an interception.

During a loss to Hutchinson Community College, Willis had his most impactful game of the season with six tackles, including a sack, and he also had an interception.

At Troup, Willis was an all-state linebacker as a junior before making the transition to wide receiver, and he led the team in receptions in 2018.