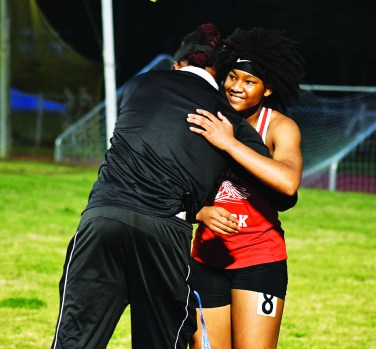 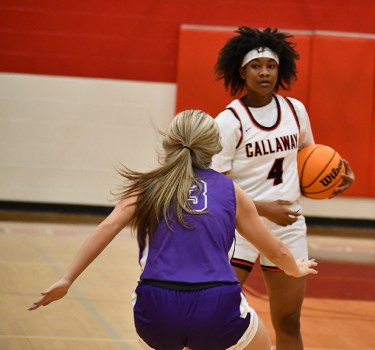 It was a school year to remember for Callaway High’s Niakoe Burks.

During basketball season, Burks helped lead Callaway to the third round of the state tournament, and in a thrilling second-round win over Chattooga, she hit a buzzer-beating shot at the close of regulation to force overtime.

When basketball season ended, Burks made the transition to track and field, and she had a superb spring that ended with an exceptional showing at the state track and field meet in Powder Springs.

Burks finished third in the 100-meter dash and was second in the long jump, and she was also a member of the 400-meter relay team that made it to the state finals.

of everything that Burks brought to the team, and her value extended beyond being able to run fast.

“I was impressed with her leadership,” Johnson said. “She led our (400-meter relay) team that ran at state. She was the oldest member on that group. There were two ninth-graders, a 10th-grader, and an 11th-grader, and they made it to the top 16 in the state.”

Johnson believe Burks’ commitment and drive can serve as an inspiration to her teammates.

“Hopefully her leadership, and how she impacted not only herself and the team, can show these other girls that if something’s you really want to do and put the time into, you can do it,” Johnson said. “You can be better.”

Burks nearly returned home with a state-championship medal in the long jump.

Burks finished second with a jump of 17 feet, 3.5 inches, which was less than three inches off the winning distance of Heard County’s Zekylah Boyd (17-6).

Next up for Burks was the 100-meter dash, and she made another strong bid for a state title.

After a stellar showing in the qualifying race, Burks raced to a time of 12.71 seconds in the finals, leaving her just off the winning pace of Sanna Searles of Dodge County, who placed first with a time of 12.61 seconds.

In the 400-meter relay, Callaway had the 13th best time in the state.

The state meet was a little more than a week ago, and Johnson said it didn’t take long for Burks to resume her training regimen.

“With her mentality, she’s working right now,” Johnson said. “She took one week off, and she’s already back on it.”

During basketball season, Burks was a part of one of the most successful teams in program history.

Callaway beat Heard County to win the Region 5-AA championship before upending Union County and Chattooga in the state tournament.

While there was no suspense in the 72-45 win over Banks County, Callaway had its hands full against Chattooga.

Callaway was trailing by two points in the closing moments when Burks raced nearly the length of the court for a layup to tie it, and it was on to overtime.

Callaway dominated the four-minute extra period and beat Chattooga 66-61 to advance to the third round.

Had Burks’ shot at the buzzer not fallen, Callaway’s season would have ended with a heart-breaking home loss.

Instead, Callaway advanced to the final eight for the first time in program history.

“I was just happy it went in,” Burks said after the game. “I thought it was going to miss. It kept spinning and spinning.”

“We have great chemistry,” Burks added. “We’re like family.”

Burks will be a senior during the 2021-2022 as she looks to add to her already impressive athletic resume.