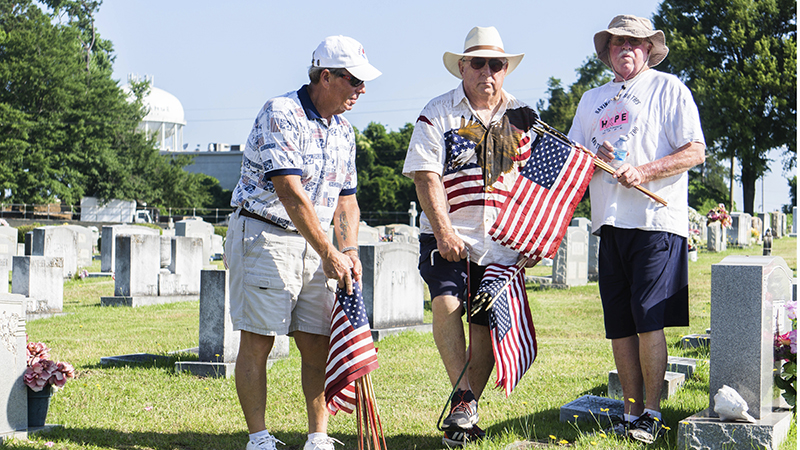 Volunteers are needed to place flags on graves at Shadowlawn Cemetery on Saturday in honor of Memorial Day. --Contributed

Those looking to observe Memorial Day this year can attend the annual service in Hogansville on Monday and can also honor veterans by placing flags on the graves of veterans at Shadowlawn Cemetery in LaGrange.

Starting at 9 a.m. on Saturday, the general public is invited to help the member veterans organizations of the West Georgia Veterans Council place flags at Shadowlawn Cemetery, according to a press release from the council. Though the council will have metal devices to punch holes in the ground for the flag staffs, they suggest bringing large screwdrivers for that purpose just in case a lot of people show up.

The public is also invited to return to the cemetery at 9 a.m. on Tuesday, June 1 to help collect flags. The veterans council will also put up flags in Southview, Meadoway Gardens, and Restlawn cemeteries at various times.

Due to prior COVID-19 restrictions, the council won’t be holding its usual Memorial Day Service. According to a press release from the council, by the time restrictions had been lifted, many of those who otherwise would have attended the service had made other commitments. The council hopes it will be able to hold its annual Veterans Day service in the fall and resume its regular Memorial Day activities in 2022.

As for Hogansville, a Memorial Day service will be held at Calvin Hipp Veterans’ Memorial Park at 11 a.m. on Monday, according to chaplin and Gulf War veteran George Bailey, who has organized the event for the past 13 years. Bailey said the service will last about 30 minutes. The event will be hosted by American Legion Post 152, also known as Hogansville Post 152, of which Bailey is a member. The guest speaker will be Bernie Richardson, a U.S. Army Reserve veteran. Masks will be optional.

American Legion Post 186 from Greenville, Georgia will attend the service.

Bailey expects a good turnout for the event.

“It’s always good to remember our fallen comrades … It’s not just a day off, just to have a barbecue… people shopping and people going on vacation,” said Bailey, explaining the importance of remembering those who made “the ultimate sacrifice.”