Warrick takes over as course superintendent at Highland Country Club 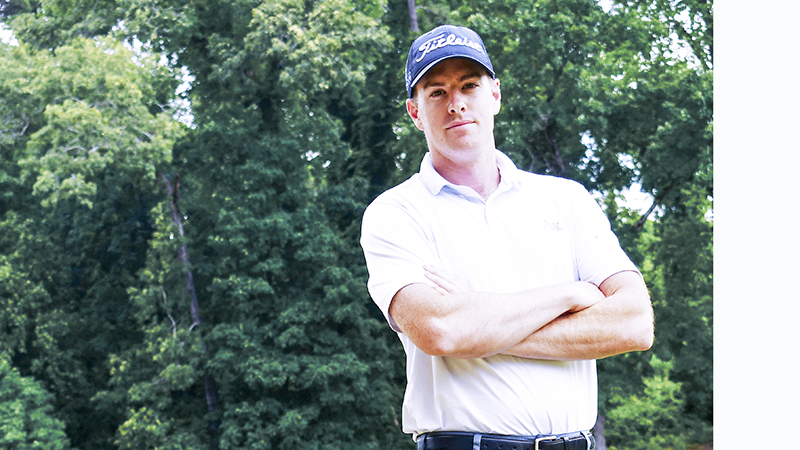 When Chris Warrick surveys the winding fairways, the sloping greens, the pine trees, and everything that makes up the golf course at Highland Country Club, he sees a special place.

The course, and the potential for what it could be, was largely what attracted Warrick to Highland Country Club, and it’s why he agreed to become the club’s new golf-course superintendent.

Warrick has been on the job for one week, and it has been a whirlwind experience as he not only familiarizes himself with the facility, but gets to know the people as well.

Being a superintendent is a big job that begins early in the day, oftentimes before sunrise, and ends late.

A superintendent oversees everything that has to do with the operation of a golf course, from supervising the staff, to making sure the course is in tip-top shape and preparing it for play each day.

Warrick, whose previous professional stops included a pair of facilities that host PGA tournaments, knows what the job entails and how much effort it requires, and he wasn’t going to go somewhere unless he felt 100 percent comfortable with his new potential home.

After spending time at Highland Country Club, and in LaGrange, he knew this was the place for him.

“I’ve interviewed at a couple of different places, and I’ve turned down a couple of offers,” Warrick said last week while taking a break from his busy day to enjoy lunch at the country club. “A big part of my job search, I wasn’t necessarily trying to find something by a certain time, I was trying to find a place where I could go, where I would get along with the membership because ultimately that’s what’s going to make this job and this place special. You have to like where you work, and you have to like the people you work for. I work for all the members in the grand scheme of things. So finding a membership that I was comfortable with was important.”

Warrick developed a passion for the sport early in life while spending time on the course with his grandfather, and after finding other sports interests in high school, he re-connected with golf as a senior.

Warrick continued to play golf in college, and he graduated from the University of Tennessee at Martin with a degree in Plant and Soil Science with a focus of Golf Course and Landscape Management.

Before determining what his life’s work was going to be, Warrick had a job at TPC Southland in Memphis, and that’s when the eureka moment struck, and he knew what his future held.

“I started working at TPC Southland as a crew guy,” Warrick said. “I was working on greens, raking bunkers, at the bottom of the totem pole.”

The course superintendent, Warrick noticed, would “ride around in his golf cart, and I thought, that job looks pretty sweet.”

Warrick’s first full-time position after graduating from college in 2013 was at TPC Southwind, which is home to a PGA tournament each year.

After more than three years at Southwind, Warrick came to Georgia to be an assistant superintendent at TPC Sugarloaf in Duluth, which also hosts a PGA tournament.

Warrick’s professional journey continued at Grey Oaks Country Club in Florida, and he remained in the Sunshine State when he joined the staff at Audobon Country Club in August.

“I’ve been very fortunate with where I’ve been, and the people I’ve worked under,” Warrick said. “I’ve been under some people who are going to be in the Hall of Fame in our industry. I’m pretty excited about the people I’ve mentored under.”

Warrick has worked at some of the top golf facilities in the country, and he sees that same sort of potential at Highland Country Club, which will celebrate its 100th birthday next year.

“It’s not going to take a whole lot of extra fancy things to make it special. It has all the characteristics already,” Warrick said. “You need to get the membership behind it, and motivated to make it happen. It’ll fall into place. We can probably be top-five in Georgia in my opinion.”

Warrick, who is having a home built in LaGrange for he and his wife, Lilly, and their seventh-month-old son, Noah, has been getting the lay of the land at the country club over the past week, with his dog, Cotton, often accompanying him.

“Mostly what I’ve been doing these first couple of days is finding out what makes this place special,” Warrick said. “You have all these ideas you’re trying to put in a row.”

Warrick is also getting to know the members of his staff, and letting them know how he does things.

“Right off the bat, a lot of it is training the staff to where they can operate without being directly supervised,” Warrick said. “That’s been my main focus these first couple of days.”

Warrick is looking forward to this challenge, and he’s also excited about making LaGrange his new home as he and his wife take their first steps in parenthood.

“It feels like a family-oriented town,” Warrick said. “It really shows. We’ve got a small child, so that was a big part of the appeal.”