Flags placed on graves at cemetery 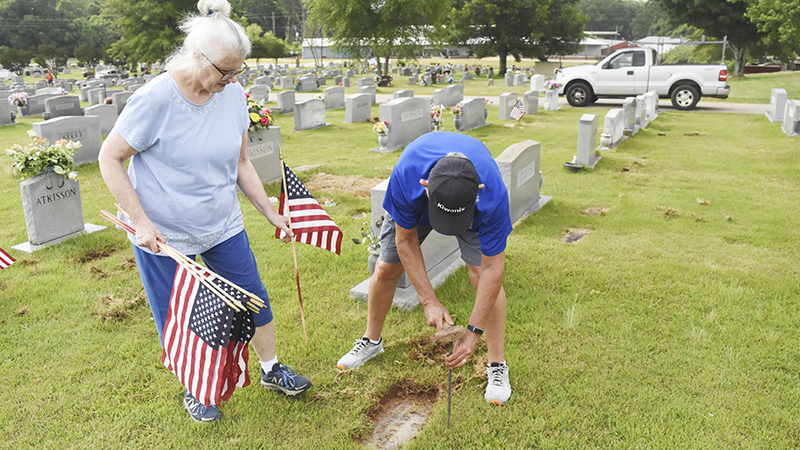 On Saturday at Shadowlawn Cemetery, starting at 9 a.m., volunteers paid respect to deceased veterans by placing American flags by their graves. The flags were provided by the West Georgia Veterans Council.

This year, the council didn’t hold its annual Memorial Day service due to COVID-19 restrictions. By the time the restrictions were lifted, many of those who would have attended the service had committed to other plans.

Veteran Bernard Bledsoe of the Marine Corps League said he remembers the tradition existing as far back as 1977, when he came to LaGrange with Milliken. He said that due to COVID-19, the flags weren’t put out last year.

He pointed out that veterans’ graves had markers.

“And this is a stone marker, and you can see it’s got the name of the person, their rank, their branch of service, and some other information,” Bledsoe said.

He said the family of a deceased veteran can apply to the Veteran Service Administration to have a veteran’s marker placed near his or her grave.

Bledsoe said Shadowlawn Cemetery is the final resting place of about 1,300 veterans.

Bob Yates, a former member of the Marine Corps, said he was participating in the event to say thank you to former servicemen who “gave all they could give.”

“If it weren’t for them, we wouldn’t be here right now today,” Yates said.

Yates said he knew several of the veterans buried at the cemetery.

Vietnam veteran Randy Dollar, a Purple Heart recipient who was wounded twice in combat, also said he knew some of the veterans buried in the cemetery.

“I’ve got about four classmates over here I went to school with,” Dollar said.

“You know, it’s the least thing you can do — show up for a couple of hours and put out some flags,” he said.