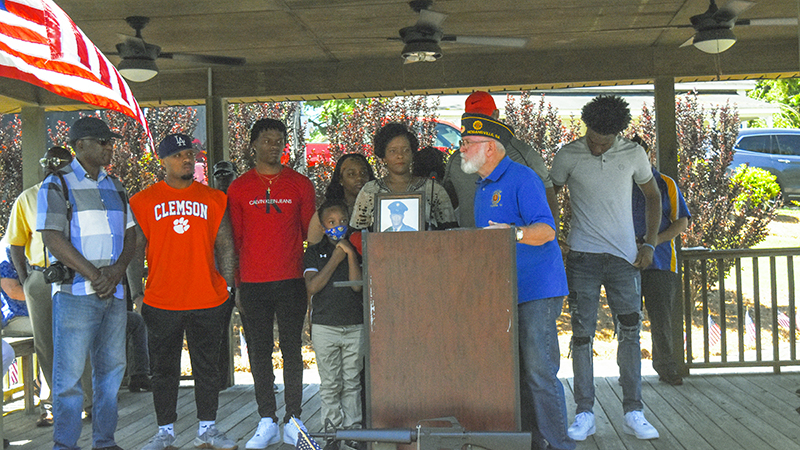 On Monday, a Memorial Day service was held at Calvin Hipp Veterans’ Memorial Park in Hogansville. Chaplin and Gulf War veteran George Bailey, who has organized the event for the past 13 years, thanked the crowd on hand for taking a few moments to honor veterans who made the ultimate sacrifice.

After Bailey’s introduction, Pastor Terry Rainwater of Highland Baptist Church led everyone in prayer. Up next was Hogansville Mayor Bill Stankiewicz.

“I remind you that this is a holiday in which we commemorate the lives, as Abraham Lincoln said, who gave the last full measure of their devotion. And I want to welcome you to a city that’s changing. I’ll take this opportunity to point out this week we’re going to move into our new city hall over here, and we’re looking forward to those changes. But thank you for coming out today. Thank you for helping us commemorate the lives of those who served their country,” Stankiewicz said.

A national anthem rendition by Whitney Houston was played. After that, Larry Dunaway of Post 186 accepted a plaque for deceased Vietnam veteran Tony O’Neil, a former corporal in the U.S. Army.

“It is a duty as a citizen of this great nation to remember our veterans, their families, the past and active that are serving around the world. We must never forget our great military history, personnel, and families that have made the ultimate sacrifice for our nation. It is Rolling Thunder’s quest to strive to fully speak for those that may not be able to speak for themselves at this time,” said Richardson, who was awarded a plaque.

Soon before the event ended, the family of fallen Vietnam veteran Emory Ogletree was invited onto the stage and received a plaque.