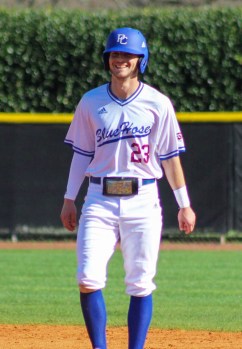 David Sweat and the Presbyterian Blue Hose will try to take down the defending champs.

Presbyterian, which won the Big South tournament championship to advance to the NCAA tournament, will face Vanderbilt in an opening-round game on Friday.

Vanderbilt, the number four national seed, won the 2019 national championship, and there was no NCAA tournament in 2020 because of COVID-19.

Presbyterian knew it had to win the conference title to advance to the NCAA tournament, and it made it happen.

Presbyterian (22-21) went 3-0 in the conference tournament, and it beat top-seeded Campbell 8-5 in the championship game.

Sweat, a senior, appeared in the championship game as a pinch-runner, and he scored a run.

Sweat, who as a senior at LaGrange High was a part of a team that reached the state semifinals, was a two-year starter at Marion Military Institute before transferring to Presbyterian.

At Marion Military, Sweat hit .367 during a standout freshman season, and he had a .346 average as a sophomore.

Sweat has played in 28 games with 11 starts this season, and he has six hits and four RBIs, and he has been hit by a pitch five times.

There will be four teams in the NCAA regional at Vanderbilt, and the regional winner will advance to a two-team super regional.

The eight super-regional winners will qualify for the College World Series.

Joining Vanderbilt and Presbyterian in the regional are second-seeded Indiana State and third-seeded Georgia Tech, who will play at 1 p.m. on Friday.

The double-elimination regional continues through Monday when a winner will be crowned.

Sweat hit .432 from the leadoff position, and he along with a handful of his teammates made the Georgia Dugout Club all-state team.

Since Sweat didn’t lose a year of eligibility in 2020, he can return for one more season at Presbyterian if he chooses to.