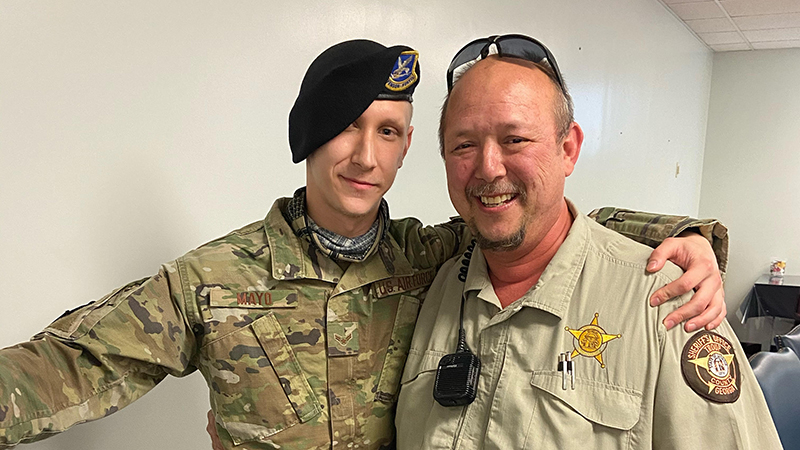 Troup County Sheriff’s Office Deputy Frankie Mayo thought he was having a meeting with his captain on Tuesday, May 25.

However, when the door to the meeting room opened, his eyes landed on his son, Senior Airman Christian Mayo, who had returned home early from his military assignment.

The reunion was captured on video both by Christian’s girlfriend and one of Frankie’s co-workers with the TCSO and was posted on the TCSO’s Facebook page.

The video shows Frankie laughing as his son enters the room and then nearly falling over during their hug.

Several of Frankie’s co-workers and his captain had been in on the surprise and kept it secret for at least a week.

“After the shock wore off, I said ‘that’s my son standing there.’ It was a total shock for me,” Frankie said. “We surprised his mom over a year ago, but I didn’t think he’d do that to me.”

Before the surprise visit, Frankie had been asking his son for weeks to give him an idea of when he was coming home, but Christian kept pushing a date off.

Frankie was told that he had a meeting with the captain around 1:30 p.m. that day, an event that was peculiar to him but otherwise non-suspicious.

Christian is currently stationed in Wyoming where he works in security, Frankie said. Christian has been in the Air Force for over two years and has stayed in contact with his family over Skype.

He has been catching up with his family, and some much-needed sleep, over the last two weeks and will be with them until June 9.

Frankie will be taking some time off soon to spend more time with him and possibly go to the mountains.

He hopes to visit Christian in Wyoming for Christmas.

He said he was even more grateful that Christian got to spend Memorial Day with his family this year.

“I feel even more blessed this year because last year I didn’t get to spend Memorial Day with my son,” Mayo said. “I’m thankful that he’s in the military doing what he wants to do, and I ask for prayers for him and all other service members.”