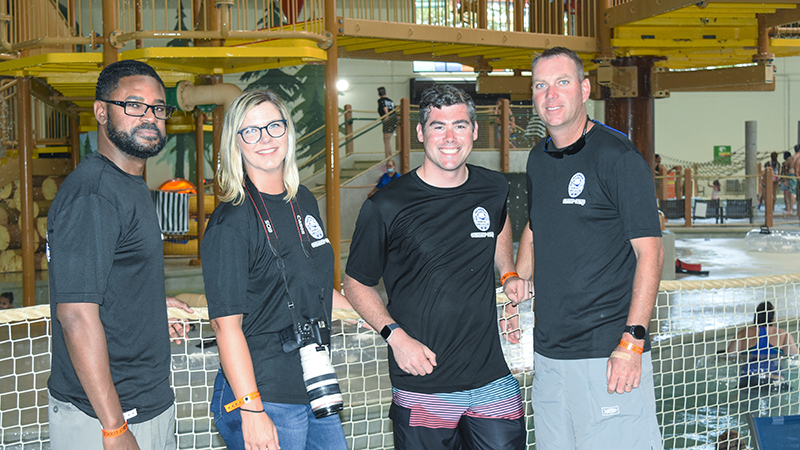 Campers at the LaGrange Police Department and Fire Youth Camp had an opportunity to spend the morning at Great Wolf Lodge on Wednesday.

According to Sgt. Marshall McCoy, who leads community outreach efforts for LPD, a little over a third of the campers had never been to Great Wolf even though they’re from the local area. He said on Thursday the campers will go fishing.

The enrollment period for the camp is over, but parents can register their kids for next year’s camp next spring. McCoy said the camp is typically full by May.

“We start back around spring break receiving applications. And then, once it fills up, we try to get as much as we can. We try to really just get a diverse group from all walks of life,” McCoy said.

The camp is free to families and supported by the City of LaGrange.

“The police department pays for it. And then, businesses like Great Wolf help sponsor and stuff like that … there’s a couple of corporate sponsors that we use every year. They’re always glad to partner, like Walmart and Great Wolf,” McCoy said.

The camp is based at the Mike Daniel Recreation Center on Lafayette Parkway, although campers may go elsewhere depending on what’s in their program. McCoy said the camp is partnered with Troup County Parks & Recreation.

“Yesterday, for instance, we were there all day. We did classes on bullying, did classes on traffic safety, had classes on strangers. The fire department came out and talked about fire safety and showed their firetruck. Our emergency services unit came out yesterday and showed them some of the equipment that they use. The Corps of Engineers was able to come out, and they talked about water safety, boating, life jackets, and just swimming in general and how to be safe while swimming,” McCoy said.

The campers also use a gym to do physical fitness exercises. The camp typically lasts from 8 a.m. until around 2 p.m. each day.

McCoy said that there were fewer campers this year.

“We did scale back our numbers this year. We typically serve about 100 kids a year, and this year, we’ll serve roughly 50 kids. We’ve cut it in half. And a lot of the reason for that is manpower and so that we’re able to space kids out,” McCoy said.

He explained that a major reason the department wanted to avoid overcrowding was to prevent the spread of COVID-19.

“We really have a great time with all the kids that were able to get in,” McCoy said. “We appreciate the fact that the city allows us to do this as a police department.”