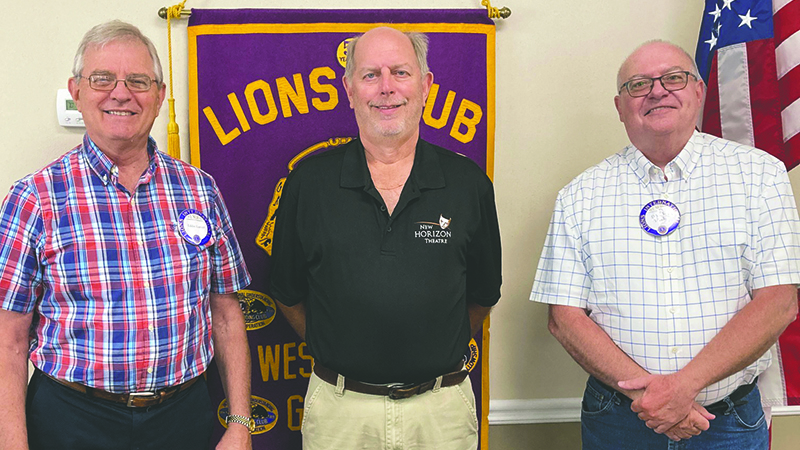 New Horizon Theatre Artistic Dirctor Bill Nixon (center) spoke about the upcoming events at the theatre for the 2021-22 season.

Though COVID-19 has affected nearly every aspect of daily life for the past 15 months, the New Horizon Theatre continued to perform during the 2020-21 season with six regularly scheduled shows. New Horizon Artistic Director Bill Nixon, who has worked with the theatre since its inception 36 years ago, was the guest speaker at the West Point Lions Club meeting on Wednesday.

Nixon spoke about the start of the New Horizon Theatre, the upcoming shows and a camp that it will perform during the 2021-22 season.

In 1986, the first New Horizon performance was an hour-long performance of “No, No a Million Times No” in Langdale Auditorium before it was restored. There were 150 people in attendance. The show’s lighting was made up of three rented lights from Atlanta, where the stagehand clamped them to the stage rail and ran extension cords around the theatre for the performance.

“That was June of 1986,” Nixon said. “Since then, we’ve done 161 productions. The last one we did was ‘Grease’ in April. We’ve been doing it a long time and it’s going strong. Like everyone else, we fought last year a little bit. Despite COVID, we produced six shows last season.”

Though the New Horizon Theatre had to postpone some shows, six is still the amount it normally performs in a season.

The shows were “Bee Hive,” “Mary Poppins,” “Dracula the Musical,” “Once upon a December,” “Dearly Beloved” and “Grease.”

The first show of the 2021-22 season, “Joseph and the Amazing Technicolor Dreamcoat,” will be performed from Sept. 9-11.

“For those that bought season tickets, Joseph is the first show and that is typically our kids’ show. This year, it is going to be kids and adults,” Nixon said. “We’re not going to have a strictly kids’ show. There will be two or three shows that kids are involved in.”

“The Hobbit,” which will be the only nonmusical performance, will be performed from April 21-23.

Nixon said New Horizon has only dealt with COVID-19 one time so far. It happened in early December right before the first show of “Dearly Beloved” was originally scheduled to open at 8 p.m. on Dec. 10. At 6:15 p.m. on Thursday, one of the actors called to inform the crew that he had COVID-19 symptoms.

“We’re all in the green room except one of our actors. He called and said ‘I think I have COVID,’” Nixon said. “It was too late to run someone else on, so we called people and told them not to come tonight. We took all 12 and eight crew members, sent them home and quarantined them for a week. No one else had it, which is a miracle. We called all of our season ticket holders and all those that had pre-ordered tickets and got in touch with everyone but six people. Six people showed up, so we gave them a tour of the theatre, tour of the costume shop and a tour of the bell museum.”

Though each show broke even, which is what is normally budgeted for, the New Horizon Theatre had a loss in funds due to a lack of donations and the difference in taxes.

“We budget each show to break even or make $1,000, which we did last year. We didn’t lose any money on the shows,” Nixon said.

To help with the loss of revenue, the band that was assembled from “Grease” will be holding a benefit for the theatre on Friday, June 11 at 7 p.m. EST. The band will perform several different genres of music and the show is free to attend.

“One thing that we have in this theatre is amazing voices,” Nixon said. “There are about 20 singers. This is a fundraiser for the theatre. There is no admission, we just ask for donations at the door. If you think it’s worth a dollar, leave a dollar. It’s a one-night-only [event]. It’ll be about a two-hour concert. It’ll have music for everybody. There are [Frank] Sinatra songs, Led Zeplin songs and everything in between.”