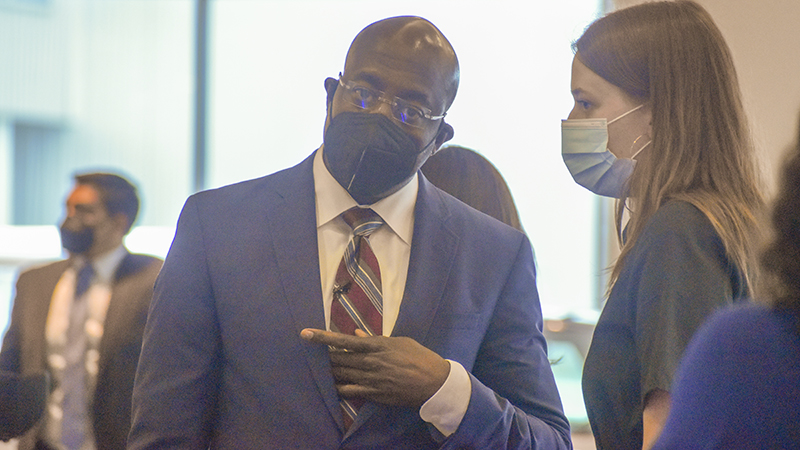 On Wednesday, during his first visit in his Jobs for Georgia Tour, Senator Raphael Warnock visited the KIA Georgia plant in West Point and spoke on job development and economic opportunities in the state.

Warnock spoke with media personnel and KIA officials about his support for the American Jobs Plan and U.S. Innovation and Competition Act of 2021.

Warnock’s visit followed a two-day shut down at Kia Georgia that occurred last week due to a global shortage of semiconductor chips, a needed element in the plant’s vehicle development.

Warnock described the shutdown as a “ripple impact” for families across the state and on the economy.

“It’s a loss for the company and for the workers,” he said. “I’m doing everything on the federal level to make sure that never happens again.”

The American Jobs Plan and U.S. Innovation and Competition Act of 2021 are pieces of legislation that will make needed investments in promoting semiconductor research and development in the state and will support jobs at facilities like Kia, he said.

On top of the importance of investing in electric cars, Warnock also spoke on the role education plays in leveling the playing field for job opportunities in workplaces such as Kia.

“There is an important role for our community colleges and technical colleges,” Warnock said. “We have to make sure that young people, regardless of where they are from, that they have access to the kinds of jobs that represent the future.”

An end to the shortage may come from the proposed $52 billion provision and bill that will be invested in a federal chip program to address the semiconductor shortage, he said.

“This keeps our American supply chain network resilient and strong, preventing future shortages of essential materials and goods,” he said. “We cannot delay when Georgia jobs are on the line.”

During his visit, Warnock was given a tour of the Kia plant and had an opportunity to test drive one of the plant’s 2022 vehicles.