Bliss shines at Auburn, could be high pick 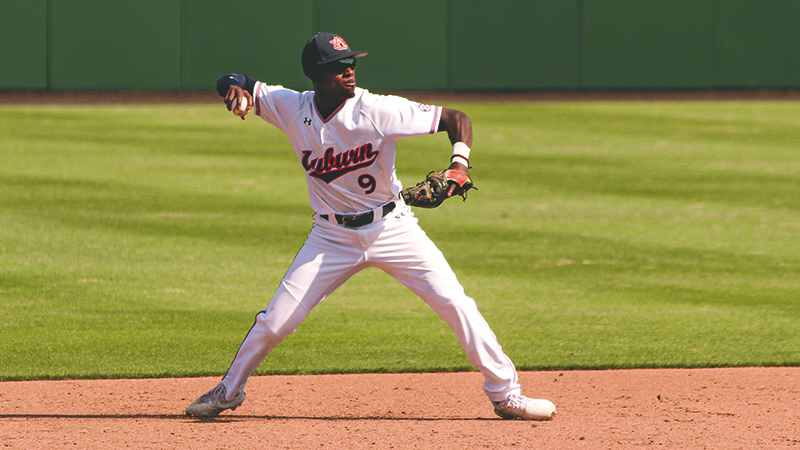 Auburn Tigers infielder Ryan Bliss throws to first during the game between Auburn and Texas A&M earlier this season. Bliss was a star for the Tigers this season, hitting 15 home runs. -- Jacob Taylor/Auburn Athletics

The stage has changed, and the stakes are higher, but the outlook Ryan Bliss brings to the baseball field each day is the same now as it was more than a decade ago when he first slipped on a glove and gave a new sport a try.

From his days as a youth player to his time at Troup High where he was a four-year starter, to the three seasons he spent as a member of the Auburn University baseball team, Bliss has embraced every opportunity to get between the white lines, to play a sport that means so much to him, and has brought him so much joy over the years.

“It is your job, but you grew up loving and having fun with it,” said Bliss, who is coming off a brilliant junior season that earned him a spot on the Collegiate Baseball All-American team. “Why not incorporate that every day? That’s the way I go about it, and I’m loving life playing baseball.”

Bliss plays the sport with a smile, and he plays it well.

Bliss has succeeded at every level, and that hasn’t changed at Auburn, where he was a starter from day one.

After two successful seasons to begin his collegiate career, including a freshman year when he helped Auburn make it to Omaha for the College World Series, Bliss enjoyed a brilliant junior year that ended with a loss to Ole Miss in the first round of the SEC tournament.

The home-run total jumps out.

After hitting a combined five home runs his first two seasons at Auburn, Bliss tripled that number during a breakout 2021 season.

Bliss compiled an impressive resume during his first two seasons at Auburn, but he is always pushing himself to be better, so as he looked forward to the 2021 season, he took aim at his home-run total.

“The one thing I wanted to improve on was my power aspect,” Bliss said. “The first two seasons I was learning how to be a great hitter. That was the next part of my game, was to get the power numbers up. I worked all offseason, all quarantine on that, with my former summer-ball coach Wes Rynders. We worked on my bat path and staying consistent with my swing, and being able to hit the ball in the gaps and that leads to home runs. I think that showed up tremendously this season. I’m glad for the jump I made.”

Bliss figured the effort he put during the offseason would yield positive results, but he did not expect to see such a dramatic change.

“I set my goal for eight home runs this year, and I exceeded that by seven,” Bliss said.

“By doing that, it just showed my hard work pay off, and it was good to get rewarded for that.”

Not surprisingly, Bliss has earned recognition for his outstanding work on the ballfield.

Two weeks ago, Bliss earned a spot on the all-SEC team, and last week he was named to the Baseball America All-American team for the second straight year.

Unfortunately, while Bliss had a wildly successful season, it was a struggle from a team standpoint, and Auburn (25-27) finished with a losing record and didn’t qualify for postseason play.

Despite that, Bliss was proud of the way he and his teammates competed every day, even if the results weren’t always there.

“The most impressive part of the team that I was on this year, every day we came to the field, and we expected to win,” Bliss said. “We came to the field ready to play, and it showed. We had a few things that didn’t go our way, but that’s just baseball. We had a few injuries here or there that may have slowed our season down a little bit. At the same time, coach (Butch) Thompson said it best, we came to the field to play every day. Sometimes things don’t work out, but I was very impressed with the team.”

The line between winning and losing can be razor-thin, and that was the case for Auburn this season.

“We lost seven, or eight one-run games just in the SEC,” Bliss said. “It’s a game of inches. The SEC is second to none. Everybody is good. It’s the best conference in America.”

While Bliss can return to Auburn next season, it’s likely his time as a college-baseball player has come to a close.

Bliss is eligible for the Major League Baseball First Year Player Draft, and he figures to come off the board fairly early on draft night in July.

If Bliss is done at Auburn, he’ll look back fondly on his time there, and he’s glad he opted to make it his college home.

“To this day, I still think me coming to Auburn was the best decision ever,” Bliss said.

Bliss was a selfless player who was not only committed to being the best he could be but helping his teammates develop as well.

His coach for the past three seasons, Butch Thompson, recalls how Bliss mentored freshman infielder Cole Foster this year.

“He’s teaching a guy who has enough skill to potentially take his position at some point during this year,” Thompson said early in the season. “That’s a leader who’s willing and unselfish enough to do that.”

Bliss, Thompson noted, is “the same player every day. He’s the same person. He shows up with a smile. He’s ready to work with consistent effort.”

Bliss was a highly visible player, and that meant something to him.

Bliss was committed to not only succeeding on the field but making sure that he set a positive example for anyone who watched him play.