Olds happy to be at LaGrange College 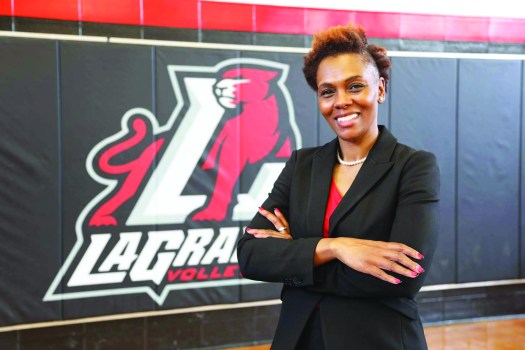 When Terlynn Olds was exploring her career options, LaGrange College wasn’t on her radar.

Olds, who in May of 2019 was hired as an associate director of athletics at the University of Alaska-Fairbanks, was looking at different opportunities earlier this year, and she’d sent feelers out to a number of colleges.

LaGrange College wasn’t one of those schools, but that soon changed.

Earlier this spring LaGrange College announced an opening for a director of athletics, and when Olds found out about it, she decided to put her name in the hat.

“It was one of those things where LaGrange wasn’t even on my to-do list,” Olds said. “I’d applied to eight positions, and I had one that I really wanted to go to. All the sudden, this position popped up. A friend of mine said hey, LaGrange is looking for an AD, and it’s a lot warmer in LaGrange than Alaska. It just snow-balled from there. In two weeks’ time, it just happened.”

Olds was hired at LaGrange College in April, and on June 1, it became official and she moved into her new office, becoming the school’s first full-time director of athletics and recreation.

For Olds, when she visited LaGrange College, it felt like the right fit, and the kinship she had with President Susanna Baxter sealed the deal.

“After speaking with President Baxter, I knew I could work with this person,” Olds said. “She’s very down to earth, and I thought we can get some stuff done together.”

While her journey to LaGrange College may have been an unexpected one, Olds has no doubt it was meant to be.

“God was moving pieces, playing chess. One more here, one move there,” Olds said. “I had in my mind this is what I want to do, and so many things happened. It just worked out. This is where I’m supposed to be.”

Olds has more than 20 years’ worth of experience in coaching and administration, and she been a head basketball coach at four schools.

Olds, after graduating from Saint Leo University (Fla.), remained at the school as

After coaching at Spring Hill College and Florida A&M University, Olds got her first head-coaching opportunity at Flagler College in 2001.

Since then, Olds has been a head coach at Palm Beach State College, her alma mater Saint Leo University, and Spelman College.

Most recently, Olds ventured to the 49th state to join the staff at the University of Alaska Fairbanks, and she remained there for two years before coming to LaGrange College.

“I’m happy that I’m here,” said Olds, who has a 4-year-old son, Grayson. “I’ve got some work to do, but I’m excited. I’ve got a great group of coaches, and I’ve spoken with the student-athletes, and I love their energy.”

A key part of Olds’ job will be working with the coaches on the staff, and that’s something she’s looking forward to.

“I feel like I’m still coaching,” she said. “Right now, I coach coaches. That’s the way I look at it. I tell them you’re my team. We’re going to work together as a team.”

Olds has worked primarily at smaller schools, including a handful of NCAA Division III schools, and that’s where she feels she belongs.