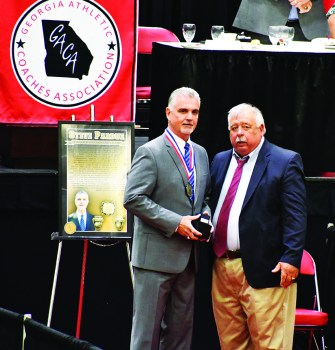 Steve Pardue is in elite company.

The 2020 Georgia Athletic Coaches Association celebrated its 2020 Hall of Fame class during a ceremony on Saturday in Dalton.

Among the honorees was Pardue, who enjoyed an extraordinary stint as the head coach of the LaGrange High football team.

Pardue is a part of a six-person Hall of Fame class, and each of those men was recognized during Saturday’s ceremony at the Northwest Georgia Trade & Convention Center.

Pardue compiled a 161-45 record at LaGrange from 1994 to 2019, and in addition to three state titles, his teams also won eight region championships.

After serving as an assistant coach at the University of Kentucky, Pardue returned to high-school football and went 24-9 in three seasons at East Coweta.

The other coaches who were recognized on Saturday were Max Bass, A.C. McCullers, Cecil Barber, Cecil Flowe and Bill Thorn.

OF NOTE: For much more on Hall of Fame ceremony, see Wednesday’s sports section.