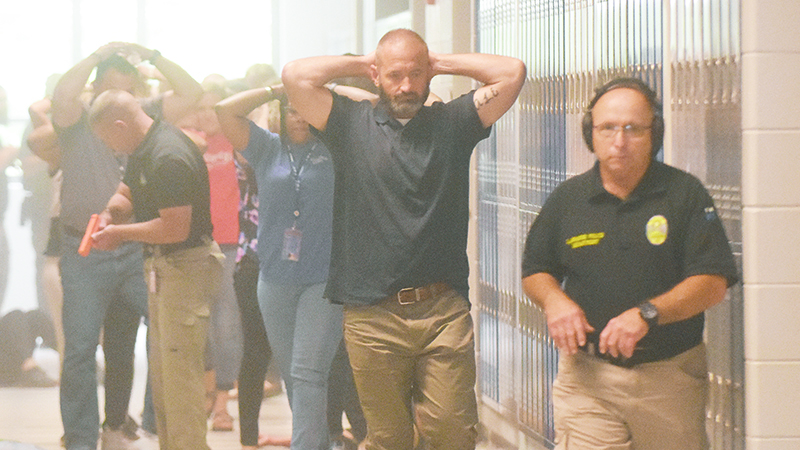 On Tuesday, Troup County School System building leaders attended a safety training program at LaGrange High School. It covered how to use fire extinguishers, how to deal with gangs, and what to do in an active shooter situation. The event was arranged through a partnership between TCSS, the LaGrange Police Department, the LaGrange Fire Department, and the Troup County Sheriff’s Office, according to TCSS Director of Public Relations Yolanda Stephen.

“We feel that it’s important that our teachers and our staff are updated on the newest procedures,” Stephen said. “It’s great that we work with the LaGrange Police Department and other law enforcement to have that relationship where we can call if we need to. We need our staff to understand what it sounds like, what it feels like so they can be prepared if anything were to happen. And we think that this is the best way to do that, to put everyone in a real-life professional development situation so they can be prepared if we need to use anything.”

A portion of the training focused on fire safety.

After watching a video on using fire extinguishers, Public Educator Mike Webb of the LaGrange Fire Department helped attendees practice using a fire extinguisher to put out a virtual fire on a digital board.

During the active shooter segment, police officers simulated a school shooting. Some volunteers served as actors and laid in fake blood in a hallway. Another actor walked down the hall firing a gun. Once the scene was under control, police officers escorted attendees out of the building with their hands on their heads.

“In addition to the drills we’re doing every quarter, we thought it was time for us to do an active drill … that’s a whole different environment than what we do during a lockdown,” Heaton said.