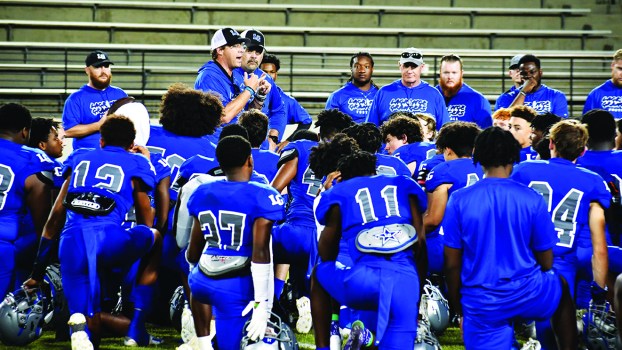 One year ago, the LaGrange Grangers were just getting started.

The Grangers were in the midst of what new head coach Matt Napier felt was a productive offseason when everything got shut down because of COVID-19 in the middle of March.

The offseason program was put on hold, spring practice was canceled, and it wasn’t until June 8 that LaGrange and other teams in the state were permitted to begin holding limited workouts, nearly three months after the shut-down.

Flash forward a year, and the situation is drastically different for the Grangers.

The Grangers had a full offseason program with no interruptions, they had their Blue Dawn early-morning workouts in May, spring practice went off without a hitch, and now they’re jumping head-first into a busy summer schedule that will include workouts at the school, padded camps, and seven-on-seven competitions.

LaGrange is looking to be as prepared as possible for the season opener on Aug. 19 against Upson-Lee.

“We’ve had two good days,” LaGrange head coach Matt Napier said on Tuesday after the second day of summer workouts. “We had 100 kids today. So attendance has been really good the first couple of days.”

The players will get together for workouts at the school on Mondays through Thursdays, from 9 a.m. until noon each day.

There will be some breaks in the routine, including one on Thursday when LaGrange participates in the Southeast Shootout Championship seven-on-seven passing tournament hosted by LaGrange College.

On July 27, LaGrange will make the transition to the official start of preseason practice, and the players will have a week of acclimation before full-contact practice starts on Aug. 1.

The summer, Napier said, is “a big backbone of your offseason. You’ve got your winter, your spring, your Blue Dawn. You’ve really got to ramp it up in the summer, get our team bigger, faster, stronger, better conditioned. That’s a big factor of getting through those acclimation days of practice.”

The players will get a break the week of July 4th for the GHSA-mandated dead week when teams aren’t allowed to hold organized activities.

There was also a dead week the week of Memorial Day, and Napier felt that was an excellent time for a break after spring practice, which was preceded by the Blue Dawn workouts that were held for one week at 6 a.m.

“It was great. I think it’s good to get away,” Napier said of the first dead week. “You’re grinding so hard. Spring practice is a grind. We did all of our Blue Dawn stuff leading up to that. It was good to get off, and rest, and I know the coach’s wives and their families were pleased to get that time. I got to spend a lot of time with my boys and my wife. It was a good thing. It’s something I’m excited we did.”

Despite getting a late start last year, the 2020 season was a successful one for the Grangers.

After winning a combined six games the previous four years, LaGrange went 8-4 last season and reached the second round of the Class AAAA state playoffs.

The Grangers not only dealt with the adversity associated with COVID-19, but tragedy struck the LaGrange family when junior team member Trae Cole was killed in a car wreck in November, a few days before a late-season game against Troup.

LaGrange lost to Troup 14-7, but it finished the regular season with a dramatic 20-19 win over Hardaway before edging New Hampstead 30-26 in a first-round thriller in the state playoffs.

LaGrange’s season ended with a 34-4 loss to Perry in the second round of the playoffs.

Napier was glad the players had each other for support following the loss of Cole.

“You turn to each other to help get through it,” Napier said. “That senior class, that’s a heart-breaking deal. It’s been a special thing to see the kids come together. Last year was an emotional roller-coaster. The kids laid everything on the line. It’s great to see kids play with true heart and passion.”