Hundreds of bicyclists make a stop in Troup County 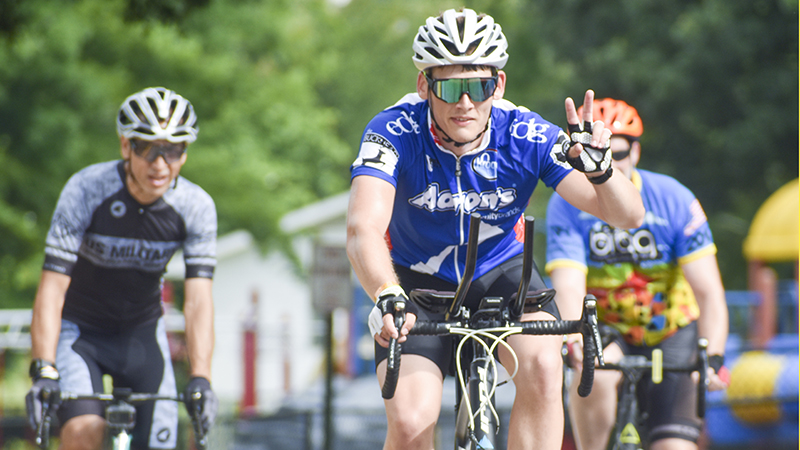 Bicyclists who took part in the BRAG event rode through LaGrange on Friday morning. --Shiann Sivell

Through rainy days and muggy nights, the nearly 1,000 Bicycle Riders Across Georgia cyclists continued their week-long trip across the state.

The 800 riders who made it this far included three LaGrange locals. The stop in LaGrange is one of the final ones along the tour and took place in the LaGrange High School parking lot.

Diana and Rick Brock and Eddie Rhodes set out on the BRAG trip both to enjoy the ride and to promote personal causes.

Diana and Rick Brock, who own Golden Bikes, began the trip with five other locals and a friend from Atlanta. Throughout the trip, only the Brocks made it back to LaGrange.

“They dropped off due to the weather,” Rick said. “The rain was really bad this year. It’s pretty much rained on us the whole week.”

The Brocks have participated in BRAG for four years now. Rick said this was the first year the weather was really an issue.

This year they camped outdoors on the first night but elected for indoor camping the following nights.

Despite the weather, the trip was breathtaking, Rick said, and gave him a chance to see places and meet people he might not have encountered otherwise.

“When you’re riding, there’s things that you see on a bike that you would never see in a car,” Rick said.

“You don’t see the houses or the wildlife…and you darn sure don’t get to stop and talk to people.”

During one of the stops, he ran into a man wearing a 1992 BRAG t-shirt. In Summerville, he met a woman who made welcome signs for the cyclists coming through.

Some of Rick’s fellow cyclists included a woman without legs who rode a specially-equipped bicycle, a tattooed man on roller blades and even a couple from Indiana who he and his wife slept beside during one of the overnight trips.

Rhodes participated as a way to promote his mission to create a chapter of the BRAG Dream Team, an affiliate of BRAG, in LaGrange. BRAG Dream Team is a mentorship program that assists children and teens in gaining better life experiences through cycling, Rhodes said.

“It’s about being a positive influence and showing kids that there are obstacles and challenges.”

Rhodes compared the program to that of the BRAG trip.

“There’s bumps, there’s rain, but it’s all been fun, and there’s beauty in that too,” he said.

Rhodes and the Brocks have been friends for years, Rhodes said, adding that he’s known Rick since he opened his shop.

This year’s Big BRAG journey began on June 5 with participants camping on Lookout Mountain, which is on the Georgia/Tennessee border.

Along the way, participants enjoyed a two-day stay in Carrollton. They camped overnight in Lafayette, Cave Spring, Carrollton, Senoia and LaGrange.

The route into LaGrange is a “rest day,” according to BRAG’s website, and riders began on Cameron Mill Road, Country Club Road, Piney Woods Drive, Lakewood Drive, and Granger Drive before stopping to set up camp at LaGrange High School.

Riders will end their trip on Saturday in Columbia. Their ride through Troup County and LaGrange will be their shortest ride of just over 40 miles.

Each year, Big BRAG participants follow back roads and paved bike trails for seven days. This year’s participants have rest stops every 10 to 18 miles, as well as support and gear vehicles and medics to make their journey comfortable and safe.

Some participants get picked up by family members when they’ve had enough or even stay in hotel rooms or campers. Many chose to camp out with their fellow cyclists.

For the Brock’s and Rhodes, they said they had their fill of camping out in the rain and wind and chose to spend the next-to-last night at home in their own beds.

They’ll continue to Columbus Saturday morning before returning home, waiting for the next route to begin next year.

“I believe I’ll keep riding until the Lord puts me in the ground,” Rick said.

BRAG is a not-for-profit corporation that provides affordable bicycle tours in Georgia. It was established in 1980, making it the second oldest cross-state bicycle tour in the country.

The 2022 route will be announced in January.