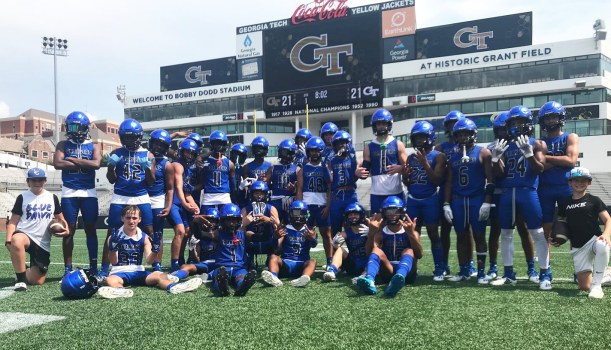 LaGrange High’s football team held its own during a seven-on-seven passing tournament at Georgia Tech on Monday.

The Grangers finished with a 3-3 record and advanced to the quarterfinals before their tournament run ended.

In the most dramatic game of the day, LaGrange went to five overtimes before beating Crisp County.

It was the first of two seven-on-seven tournaments this week on a college campus for LaGrange.

On Thursday, LaGrange will be at Auburn University for a seven-on-seven tournament.

Matt Napier, LaGrange’s second-year head coach, is a huge supporter of seven-on-seven games, despite the differences from a traditional football game.

“I love those seven-on-sevens,” Napier said. “You get to compete, and get our kids in front of college coaches. While there are some things that are no realistic from a football standpoint, there’s also a whole bunch of stuff that is. The competition, the adversity, there’s a winner and a loser. I really like that. I always like to go compete, and the kids are excited about it.”