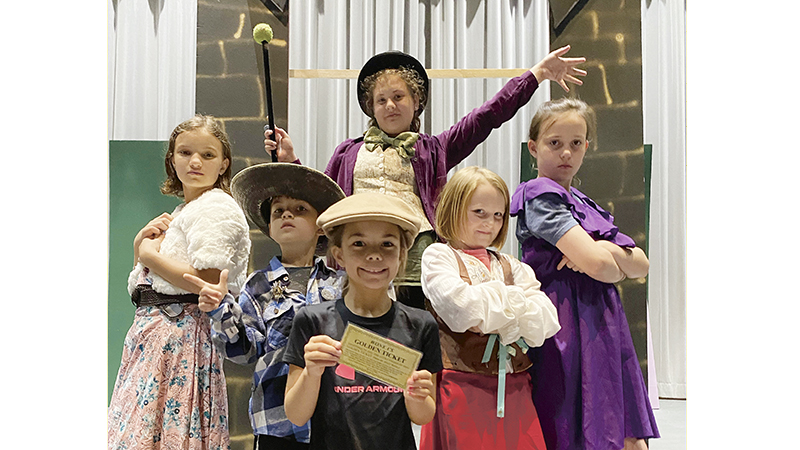 The cast at LaGrange Piano Drama Camp only has a week to memorize its lines, but these young professionals are ready to take on the story of Roland Dahl’s children’s classic “Charlie and the Chocolate Factor.”

The LaGrange Piano Drama Camp will perform “Willy Wonka, KIDS” at New Community Church in LaGrange on Friday, June 18 at 6 p.m. and Saturday, June 19 at 2 p.m., according to play director Noelle Reed. Tickets cost $5 per person and can be purchased at lagrangepiano.com.

Based on Roald Dahl’s book “Charlie and the Chocolate Factory,” the show will center on Charlie Bucket, who finds one of the five golden tickets hidden in chocolate bars made by eccentric candy maker Willy Wonka’s factory. As Bucket and other ticket winners tour Wonka’s factory, mayhem and mischief ensue. The show will include the songs “I’ve Got a Golden Ticket,” “Pure Imagination,” and “Ooompa Loompa.”

The show will have musical direction by Becky Grabowski and choreography by Annie Pauley. It will be performed by 30 thespians ages five through 12, almost all from LaGrange.

The children have to learn their lines in just a week.

“They all got their parts this morning, and they’re doing the show Friday night. So. this is like a 30-minute version of the full musical,” Reed said on Monday.

Reed said this current summer drama camp is her fifth.

“I have a couple of kids who have been with me for the last four years now. I have some kids, this is their third year,” Reed said. “So, it’s just like part of their summer, part of their tradition now. Something that we all look forward to together.”

Reed said LaGrange Piano has never put on this particular show before.

Last summer, they performed a play based on “Frozen.”

Reed has been directing plays for a while.

“When I moved to Georgia, my first show I directed was at New Horizon Community Theatre in 2014. I started my own music studio in 2017, and this is our fifth summer drama camp, but it is the sixteenth total show that my studio has done,” Reed said.

Masks will not be required. Reed said there will be plenty of room to socially distance.

“We hope the community comes out and supports them because this show is about bringing joy and happiness to children and their families,” Reed said.

In addition to the drama summer camp, LaGrange Piano hosts other summer camps on sewing, jewelry making, music and art.