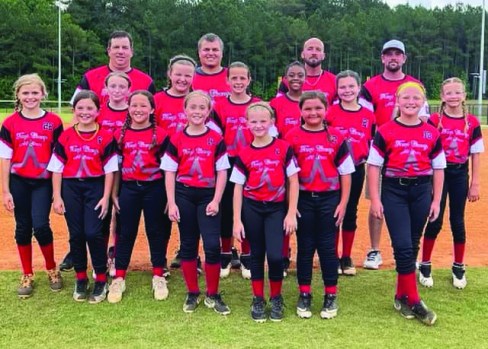 They’re hoping for a repeat performance.

At the Dizzy Dean district tournament two weeks ago, the Troup County 10-and-under softball all-stars captured the championship with wins over Heard County and Carroll County.

Those same three teams will get together once again this week, this time with a state championship up for grabs.

Heard County will host the three-team tournament, with the winner advancing to the Dizzy Dean World Series in Mississippi.

The two-day tournament begins on Thursday with a round-robin series of games to determine the seeding for single-elimination play on Friday.

On Friday, the number two and number three seeds will play at 6 p.m., with the winner advancing to the championship game against the number one seed.

At the district tournament, Troup beat Heard County and lost to Carroll County in pool play.

“I knew we had a good group of girls, I just didn’t know what to expect on the other end from our competition,” said Michael Seymour, the team’s head coach. “We went up there, and we held our own.”

The all-team roster is made up of players from the teams that competed in Troup County Parks and Recreation league play.

Seymour’s team won the league championship with an unbeaten record, so he was named the head coach, and his assistant coaches are Timothy Morgan, Edward Kelly and Aric Foster.

“My core group of girls, we went 12-0 in the regular season,” said Seymour, whose daughter Ryleigh Seymour is the all-star team’s leadoff hitter and shortstop. “From my regular-season team, five of those girls are on my all-star team. We picked the other eight from the other four remaining teams.”

While many of the players were teammates for the first time, it helped that most of them already knew each other.

“Softball in general is a pretty small community,” Seymour said. “If you’re a serious softball player, you’ve either played with or against most of these girls at some point.”

Seymour is grateful for the way everyone associated with the team, including the families of the players, has committed to the cause.

The players have spent plenty of time on the practice field since the team was formed in May, and Seymour said the hardwork “has paid off.”

“These girls have gotten so much better,” Seymour said. “They’re playing together as a team, rooting for each other. I’m going to miss it when it’s done. It’s been great for everybody.”