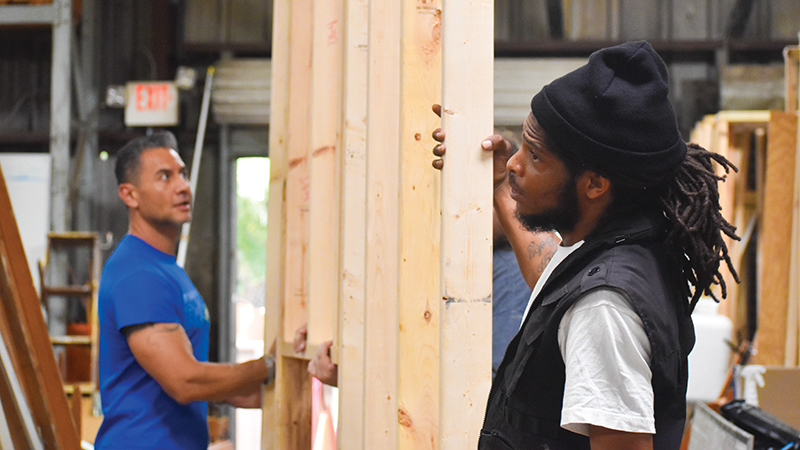 Lumber prices continue to rise and aren’t expected to rebound until 2022, at the earliest.

Lumber and the prices of other materials have ticked up across the United States in recent months, and some are really feeling the pinch.

The increase in supplies is putting a snag for builders of all spectrums, including local ones who use their resources to help others.

“Work hadn’t slowed down but the time to get materials and time to price jobs has become awkward because [material prices] are rising so fast,” Gay said. “I only get 24-hour quotes on materials, and by the time I get the quote it’s already out of date.”

request. Gay’s business is word-of-mouth and most of his clientele comes from retired people like himself who have more restricted budgets.

“With a lot of this stuff going up four or five times higher than it was … most people on budgets or are retired just postpone it until something changes,” he said. “You hate to see people do without something that they need to get fixed.”

Robert Dietz, the chief economist for the National Association of Home Builders, said the price spike is due to many reasons, including an incorrect forecasting in the housing market and low production from a strained labor force in the aftermath of the pandemic.

“Demand [for lumber] increased last year and production was flat,” Dietz said, noting that there were more incentives to buy lumber for building home projects while people were staying at home.

Relationships with outside lumber producers are causing issues, Dietz said.

“About 30 percent of America’s lumber consumption comes from Canada,” he said, adding that the United States doesn’t have enough sawmills to handle its own domestic lumber needs.

“We need to focus on increasing domestic supply, which includes producing more domestic lumber, as well as resolving the trade dispute.”

“Frustrating” was the way Sandie Pike, CEO and executive director of the Troup County chapter of the Habitat for Humanity described the situation. The rising costs in materials has brought the organization’s efforts to build homes to a standstill.

Pike has been looking at homes to rehabilitate to cut costs, but the two she identified required major renovations that cost over $140,000 for both, a price that is too high, she said.

Pike said her chapter has over 100 applicants for housing at the moment and has just finished its third house, their yearly average. The organization has not been able to start construction on a new house due to the high costs of materials, she said.

The Troup County chapter is not allowed to charge over 29 percent of an applicant’s income on a mortgage, Pike explained. Every home they build going forward would likely be a loss for Habitat for Humanity depending on the applicant’s income.

The main source of funding comes from the Habitat ReStore income, and a smaller source of income comes from the mortgages Habitat has in place with applicants. The international Habitat for Humanity does not give them funds, Pike said.

“We need people donating like never before,” Pike said. “If they have gently used items, instead of throwing them away, call us, and we’ll come pick them up.”

Other entities, like the LaGrange Memorial Library, have also had hurdles due to rising costs of materials.

Troup-Harris Regional Library System Director Keith Schuermann said earlier this month that the LaGrange Memorial Library project was delayed due to a $2 million shortfall in its construction fund.

This reason for the delay lies in the rising price of building materials, which have “skyrocketed,” Schuermann said.

Relief for the lumber and material prices is still some ways off, Dietz said.

“Unfortunately, we’re not going to see prices relax until 2022, maybe 2023,” Dietz said. “Hopefully in the coming months we’ll see a growth in the labor force participation rate and that may level out production costs.”

For Gay, the rising costs have only slowed him down, not stopped him.

Gay was able to stockpile lumber and other materials from Builders FirstSource in LaGrange and shops at the LaGrange ReStore for other materials like windows. He even refurbishes items like damaged plywood and lumber for some of his jobs.

He continues to communicate with his clients on prices and hasn’t charged them more for the additional supplies he needs.

“As long as I can get the job done … I’m not worried about making a large sum of money,” he said.