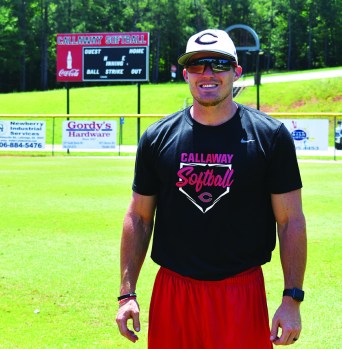 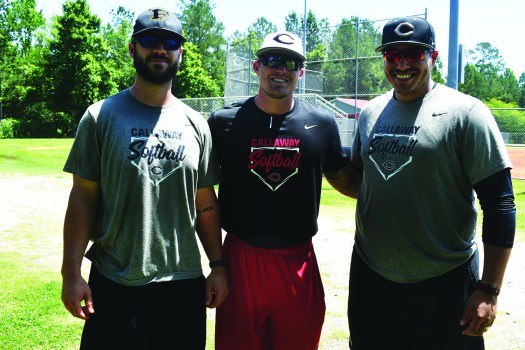 It’s been a getting-to-know period between the Callaway High softball players, and their new head coach.

Josh King was hired as Callaway’s coach earlier this year, and he has led the players through summer workouts the past two weeks.

“I couldn’t be more pleased,” King said. “The first couple of weeks, they didn’t know who I was. It’s starting to create that bond, growing that bond. That was probably the toughest thing. Since we’ve gotten to know each other, they’ve gotten to know my personality, the good and the bad. You learn those things fairly quickly.”

The summer program King has put in place includes strength and conditioning, as well as workouts on the field.

“You’re seeing everybody buying in at this point. It’s been awesome to see,” said King, who has two children (Grayson and Evie) with his wife Alana. “We just finished the second week, and they came out and this was the hottest day of the week. They didn’t know what to expect last week. This week, they knew what to expect, and they brought it.”

The summer program will continue through the start of official preseason practice on Aug. 1, and the season will begin a short time later.

With fellow coaches Luke Bailey and Dalton Reed by his side, King’s goal is make sure every player is in the best position to thrive.

“That’s what we’re preaching to them. We’re going to hold them accountable every day,” King said. “What y’all do with that is on y’all. We’re here to get y’all better, we’re going to help y’all each and every day. But at the end of the day, you can only get out what you put in. We’re going to do everything we can to give y’all the best opportunity to be successful.”

King has also assured the players that what happened in previous years won’t impact what the team will look like this season.

King believes competition, even among teammates, is healthy.

“They want to find a way on the field. They push each other,” King said. “That can only make the number one girl that much better.”

King knows what it takes to succeed on the field, albeit in a different sport.

King was an all-state baseball player at Troup High, and he then enjoyed a standout collegiate career at Marshall University from 2011 to 2015, both as a pitcher, and a hitter.

After receiving a bachelor’s degree from Marshall, King earned a Master of Education degree from Grand Canyon University.

King broke into coaching when he joined the Troup High baseball staff for the 2018 and 2019 seasons, working closely with the man who coached him in high school, Craig Garner.

For the past two years, King has been a personal-fitness instructor, and now he’s eager for his latest challenge, and he’s been giving himself a crash course on softball.

Part of King’s homework assignment has been watching high-level softball, and he even turned that into a team-bonding experience with his players.

“I’ve watched more softball in the last month than I ever had,” King said. “We had a group thread going with the girls during the College World Series. You’re getting their thoughts, you’re communicating with them. What do you think about that, did you see them hustling on and off the field? You’re just getting little thoughts, little tid-bits from them, outside of the playing field.  They’re enjoying it just as much as we are, which is kind of cool.”

Fastpitch softball, King noted, is “so much faster (than baseball), and that’s the fun part. You have to stay on your toes, you have to keep your head up, you have to be ready to go at all times.”

King is grateful that he has two people he trusts to take this journey with him.

He’s known Luke Bailey and Dalton Reed for years, and they will be with him every step of the way this season as his assistant coaches.

“I couldn’t have asked for a better staff,” King said. “Coach Reed coming from Heard County, he’s got ties to these girls, he’s got ties with some travel programs. So he’s been around the game. He knows the game. He played at Point University. And we’ve known each other since he was 10 or 11. His mom and my mom work together still, so we’re pretty close.”

King and Bailey, meanwhile, were teammates at Troup High and were a part of some special teams.

“Coach Bailey, we’ve known each other since we were kids. So, it’s a tight-knit coaching staff,” King said. “The best thing about it is we’re all kind of in the same mindset, so we’re able to work off of each other. We’re all three heads trying to figure out one goal. If I have a question, I go to one of them. If they have a question, they come to me. Nine times out of 10, we’re answering each other’s questions before we even finish it. It’s been awesome so far.”

King is also glad to be able to lean on his new colleagues at Troup for assistance, including football coach and athletics director Pete Wiggins, as well as baseball coach Dusty Hubbard.

Hubbard was the coach at Callaway when King was a player at Troup.

“Since day one, coach Wiggins has just been phenomenal, and coach Hubbard has helped me non-stop,” King said. “If I have a question, I can call either one of them right away, and they’re going to be able to answer my questions. And I’ve called them right a few times. That’s been awesome. Callaway as a whole gives you an opportunity to be successful. The family atmosphere out here is special.”