Hogansville sells bonds, will use funds to address water system 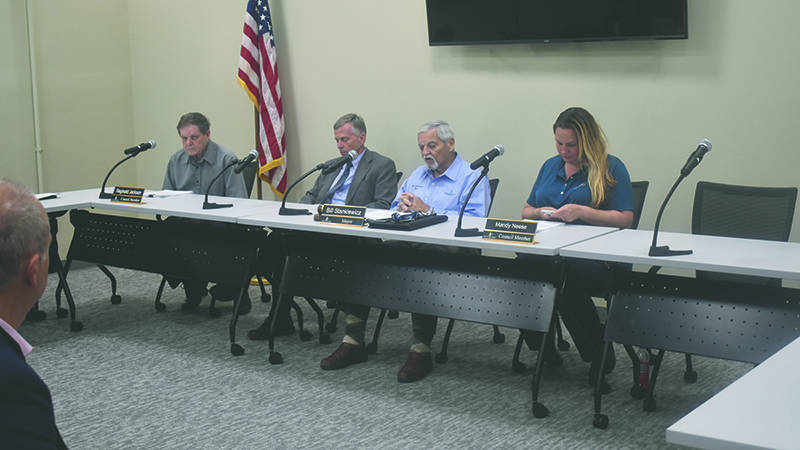 Hogansville Mayor Bill Stankiewitz speaks on the city’s plan to invest in improvements in its water and sewer system at its Thursday council meeting. --Cole Trahan

The city will spend $2 million on improvements to its water and sewer system, according to Hogansville Mayor Bill Stankiewicz, who said in an interview that the city plans to spend $4 million on the project. The rest of the funding will come from a USDA loan and grant.

He explained that the project will eliminate “dead ends” in the water system and facilitate growth, helping people build new homes.

Rogers gave an overview of pricing results for the series 2021 bonds.

He reported that S&P Global Ratings assigned an A credit rating to the City of Hogansville.

“What that ultimately leads to by having that A rating is it’s going to help us get a lower interest rate and demand for the bonds,” Rogers said.

He explained in an interview that the City of Hogansville had a leaseback agreement with the Municipal Electric Authority of Georgia. MEAG made some payments for the city, and in return, the city will pay it back later. Because interest rates were higher when the agreement was made, the city was burdened with a high-interest rate.

“We basically refinanced that,” Rogers said.

Rogers also explained that the city had sold some 1993 bonds that couldn’t be paid early.

“We basically put money in an escrow to pay those bonds off,” Rogers said. “It had some old language and business rules that we had to follow. By paying them off, we got rid of that.”

Stankiewicz explained the intergovernmental agreement between the city and development authority.

“For tax purposes and for legal purposes, the bonds are run through the development authority. But they’re guaranteed by the city. And that allows wider latitude in repaying debt and what we use the new money for. These are general obligation bonds, not revenue bonds, which means [the] full faith and credit of the city supports those bonds. And those bonds are issued, as I said, by the development authority. And therefore, there has to be an agreement between the two bodies.”

At the meeting, Stankiewicz expressed gratitude toward everyone involved in the bonds project.

“I cannot believe the amount of work that the staff of the city did to get this done, and also the work of Davenport and Mr. Pannell … It took hundreds, if not thousands of hours of effort to get this done,” he said.

“And not only to get it done, but to do it in such a way that this city got an A rating, which nobody expected. And I think we are fortunate, and I can say this because I did not have a lot to do with it. We are fortunate to have the city manager, the assistant city manager, and the rest of the staff — I don’t mean to leave anybody out — because they all worked very, very hard to get this done.”